Bob Smith during his record-breaking parachute jump last year. The latest group of jumpers are taking part at the same venue.

We’re happy to claim that Lincolnshire’s Bob Smith is the oldest Freemason ever to have made a tandem parachute jump for charity.

We’ve been unable to identify any brother older than 85-year-old Bob who’s taken a plunge from almost three miles high to raise money for charity. And his verdict after the leap of faith? “It should be on everyone’s bucket list – but I can’t get anyone else to take it on, and I won’t be doing it again. I don’t think it’s a thing any sane person would do!”

Bob’s journey to the ground meant he was the last to leave the aircraft, and plunged in freefall for almost 90 seconds before his instructor opened the parachute for the rest of the descent, which took almost 15 minutes altogether.

“It was a fantastic experience. We took the ‘scenic descent’, and I could see the North Sea and the River Humber, and all the villages and roads laid out beneath me. It was quite exciting, and I didn’t close my eyes once.”

He was full of praise for the team at Skydive Hibaldstow, with whom he did the jump. “They looked after me really well, and they were as determined as I was that I should go through with it. I had a huge rush of adrenaline and a massive sense of achievement.”

The idea for Bob’s jump grew from a conversation with a couple of friends, when they were discussing how to make a positive contribution to the #Lincs2025 Festival. “I came up with the idea, and they said I was mad. I wasn’t sure about that myself, but the doctor said it was OK, in spite of my heart trouble, diabetes, gout, and all the other things an 85-year-old suffers from, so I said I’d do it.

“And although I’ve done the jump, my feet haven’t touched the ground since, because of everything else that’s happened.”

Bob’s had a tough year; on top of the other illnesses he has been diagnosed with lung cancer, and lost his wife Pam earlier in the year. He did the jump to raise money for the #Lincs 2025 Festival, setting himself a target of £10,000 on his Everyday Hero page.

Sadly the total raised isn’t going up as fast as he came down when he made the record-breaking leap – but there’s still the opportunity or others to make donations. The link to his donations page is below. Said Bob: “What people have given already is astonishing, and I’m really grateful. If we don’t make that target, I’ll make up the difference myself,” he added. 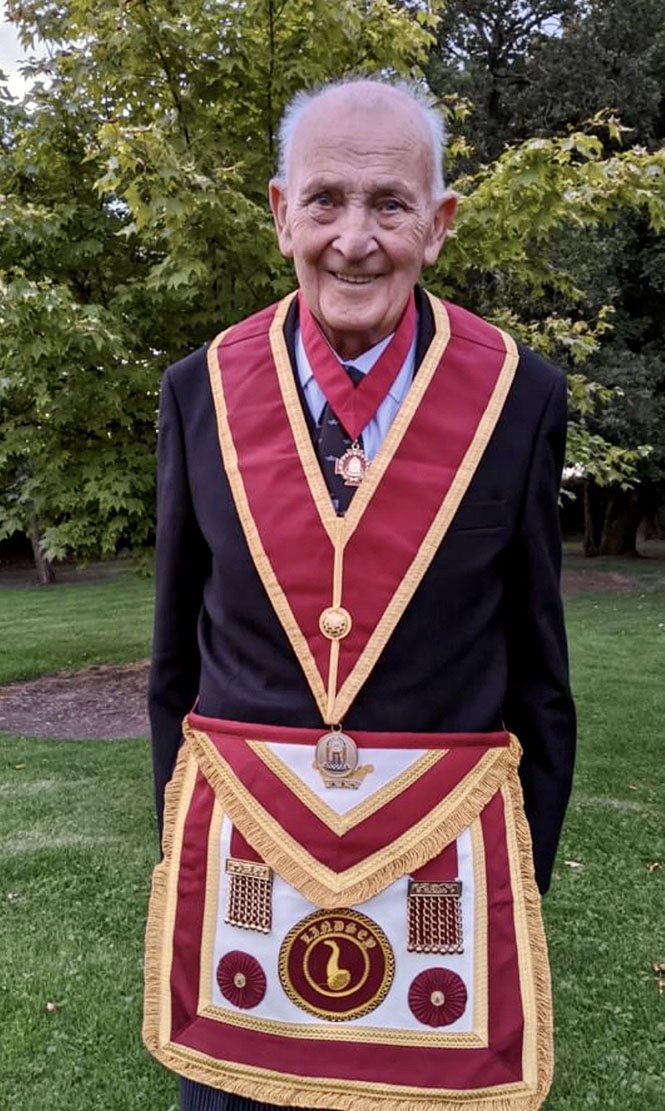 Bob in his new Order of Athelstan regalia

And there’s more…
In one of the most frantic fortnights of his life, Bob’s friends sprung a series of other surprises on him.

Surprise 1: The Grand Master of the Order of Athelstan, Paul Weldon Johnston bestowed Bob with the honour of the Knight of the Ancient and Masonic Order of Alfred the Great at a Zoom meeting attended by brethren from as far afield as Spain and India.
Surprise 2: At the same meeting, Bob was promoted to the Rank of Past Provincial Grand Burgh for the valuable contribution he has made in Freemasonry especially in the Masonic order of Athelstan and the Court of Hyrnecastre in particular.
Surprise 3: A meting which he thought was to discuss urgent Masonic business turned out to be an unexpected birthday party
Surprise 4: Lincolnshire’s PGM Dave Wheeler called round to present Bob with a trio of parachuting pictures on behalf of the Province as a memento of his record-breaking jump.

To help Bob towards his £10,000 fundraising target, please visit his JustGiving page here.