Three fathers who’ve lost daughters to suicide have so far raised about £300,000 through a 15-day trek across country from Cumbria to Kings Lynn to raise awareness of suicide in young people – the biggest killer of under 35s in the UK.

St Botolph’s Lodge members not only added £300 to their funds, but some also walked part of the journey with the trio of Mike, Tim, and Andy, known collectively as 3 Dads Walking.

The Dads’ trip, in memory of daughters Bethany, Emily, and Sophie, is also supporting PAPYRUS – Prevention of Young Suicide, founded in 1997.

The Dads passed through Sleaford on Day 12 of the trip on their way to Boston and were joined by Dave Buckenham who joined the group at various places with W Bro Ralph Galloway of Doric Lodge and W Bro  Mike Lock. The route followed the old Sleaford Navigation initially on the Spires and Steeples footpath to Haverholme Lock and then on to South Kyme. The next stage was cross country to Holland fen before picking up the Water Railway at Langrick Bridge to the finish in Boston.

Along the route the Dads were joined by various people, some who had also experienced similar tragedy some who were just wanting to support. They are always willing to talk about their individual experiences and the girls. Mike Lock said: “Mike, Tim, and Andy would say they are just Dads, but they are three truly inspirational human beings who are doing everything they set out to do in raising awareness of you suicide and supporting PAPYRUS . Their campaign to raise £10,000 each is now standing at well over £300,000. When they compete their trek they will have covered 20 miles a day over the 15-day trek.” 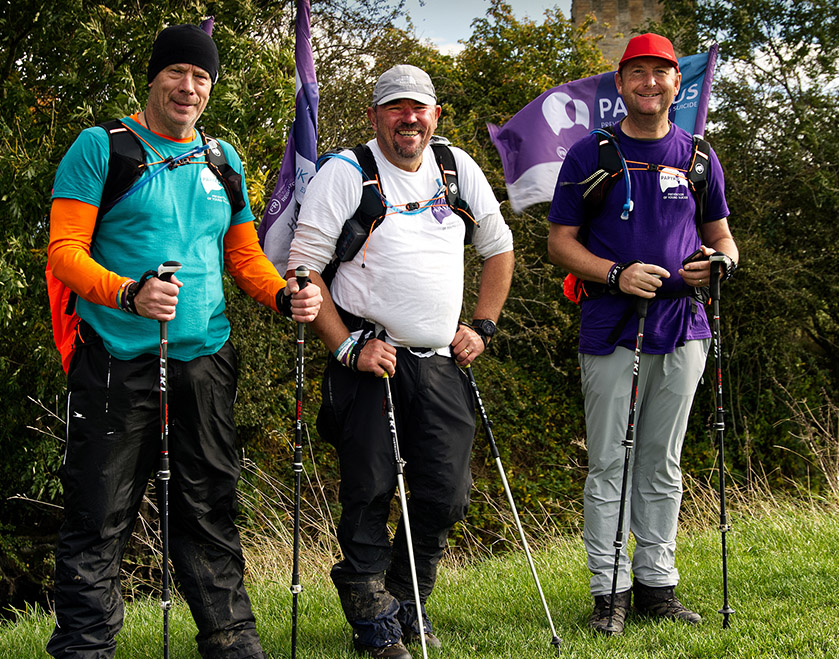 A VERY wet morning as we walked along the River Slea. We were joined by Mike Lock who, whilst working for the council, devised the Spires & Steeples route we were using. Other brave souls ventured out to walk with us enjoying various degrees of precipitation however by the time we reached South Kyme the sun was out.

We sat outside the pub drying off – the publicans gave us, and our supporters, coffee and cake. Just before we departed we were informed that the Red Arrows were heading south that afternoon and planned to overfly us as we entered the Fens! That certainly gave us a bit of a spring in our step as we left…unfortunately the weather defeated the plans. Before the Red Arrows could reach us we were engulfed in another thunder shower – there was no way the planes could get anywhere near us.

Our disappointment didn’t last long, we were intercepted by a minibus full of young people from The Pilgrim School, they had made a banner celebrating 3 Dads Walking. It was great to spend some time talking to them. On checking the Pilgrim School website the statement on the front page say “Because your history is not your destiny” – seems very appropriate for the message of hope we’re trying to communicate.