Horncastle Freemasons throw open their doors to welcome in the public 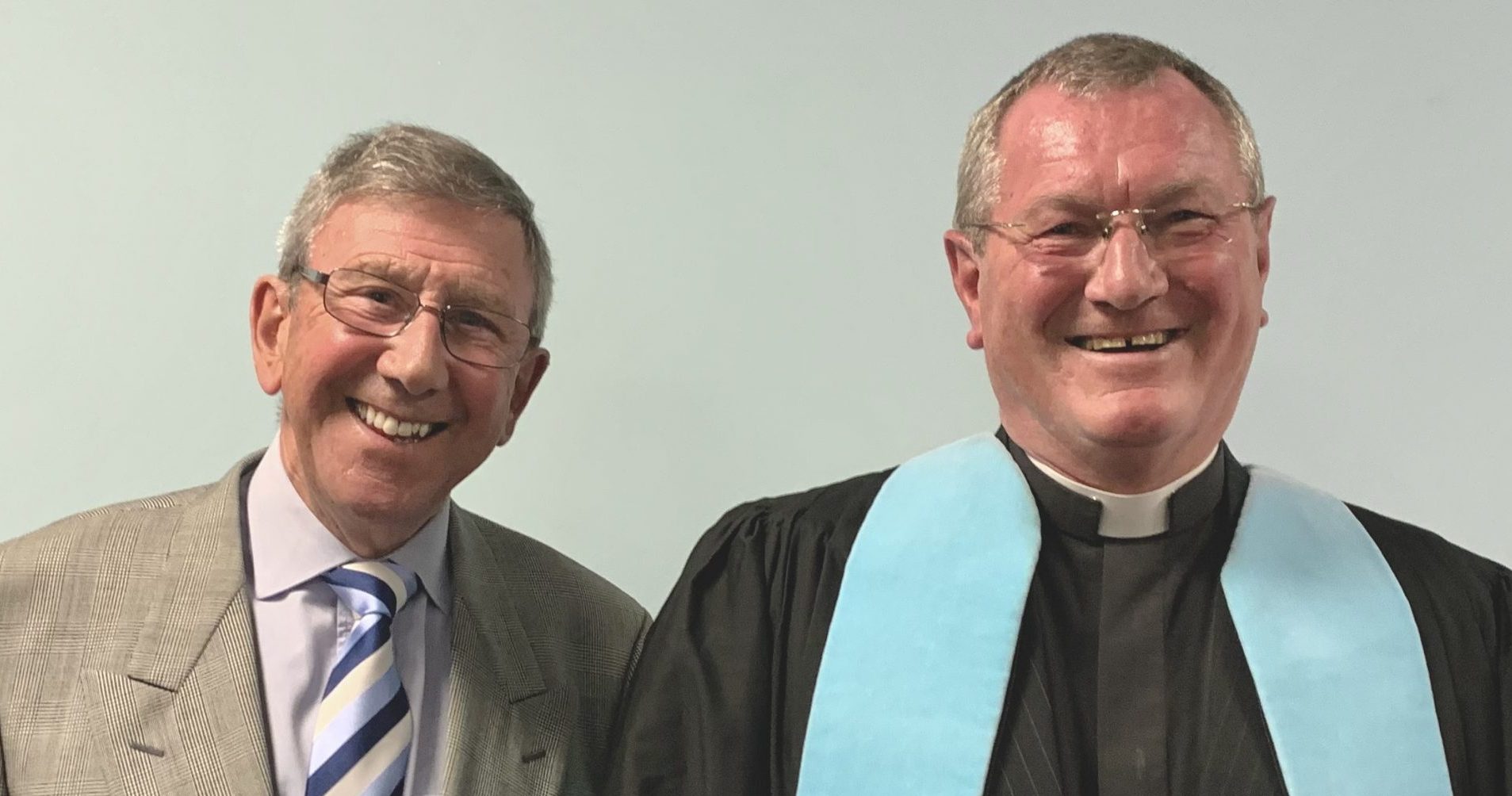 APGM Peter Brooks, who was a key figure in organising the service, and Brian Roberts, who led it. 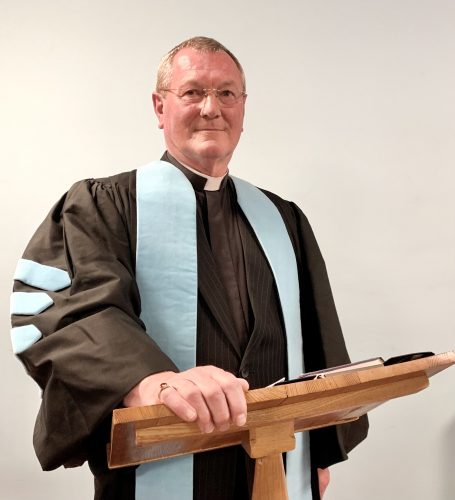 It is often said that we live in strange times; none more so than in the past two years or so in which we have, of necessity, been confined to an existence that none of us could have predicted or indeed wanted.

The period has turned the world upside down in a way which has given society the sort of shock not seen since the last world war. Yet even before that time and immediately after the first world war the worldwide flu epidemic killed more people than in the war itself.

We too, in recent times have all experienced the uncertainty of our existence in which we did not know what would happen from one month to the next. We planned for a Christmas which never happened in the way in which it was supposed to. We were all heartbroken with children and close families who could not celebrate that most holy of festivals. The restrictions on visits to loved ones in residential care homes, the high number of deaths in those environments where sons and daughters could not hold the hands of their mother, father or grandparents in their last lonely hours to help them through their suffering.

The cruelty and pain of those times will be hard to forget, if ever. The dedication of those staff who helped the sufferers yet not knowing how their own day was likely to end is remembered too. Linked to this were the restrictions on the numbers of those who could attend funerals where tributes were limited to 20 or 30 people depending upon where it was held.

I took a funeral in Lea, Gainsborough for my wife’s best friend who had contributed so much to her family, and to education, as a former primary school head teacher of some ability – although it was live streamed it was not the same, and it seemed an  inadequate sending off for such a dedicated and caring person. Many of you here will have had similar sad experiences with your own loved ones or friends. People that perhaps we thought would be here for ever have been taken away-and with those that are left, even then friendships have worn thin or disappeared altogether. People have lost their confidence to socialise.

Our Masonic fellowship has been challenged, but thankfully in many places the numbers attending ceremonies are picking up. We have lived through a truly devastating period for the world and we are thankful to have survived. Because the earlier Sars outbreaks had been less devastating perhaps we became complacent about what might happen in the future and now I sense that we will be a lot more wary of the power of unknown infections. But let me look back for a moment, because there are earlier comparisons with our recent situation – King Henry VIII had his own personal rooms hidden well away from other people in order to be confined privately well away from the possibility of disease being transmitted to him, where he took some of his possessions, including musical instruments, to while away the time.

At a later period in the late summer of 1665 cloth from London infected with fleas was delivered to a taylor in Eyam in Derbyshire. This led to an outbreak of flu like symptoms that turned into bubonic plague that decimated the population, so that in fourteen months, 260 lives out of the population of 800, were lost. One woman lost her husband and six children and had to bury them herself as the village was in lockdown – the villagers had decided to isolate themselves as the only way to prevent the spread of the disease. The isolation was the recommendation of Rev William Mompesson and later Rev Thomas Stanley the local vicars at the time. Food was left at the outskirts of the village for the citizens to collect and it was paid for with vinegar-sodden money left in the same place. The stones used for this purpose can still be seen today. You may know that the nursery rhyme “ring a ring of roses” emanates from this period-the ring referring to a distinguishing mark on the cheek of someone who was infected  –“atishoo atishoo we all fall down” refers to the death of those who caught the plague.

The people of Eyam sustained their faith by continuing with outdoor services in a glade, away from the centre of the village and did much as we have done recently, by maintaining a social distance between themselves. It is to be hoped that some good can come from our own difficult period – there has been apparently a general increase in awareness of religion and an increase in the listening to and viewing of church services, whether this will be sustained remains to be seen but it is a natural human response to tragedy and difficulty that we turn to our Creator, the Great Architect of the Universe. In turn He has worked through us so that people have found comfort by sharing their own gratitude for health by thinking of others less fortunate than themselves. How could we not be touched by the goodness and charity of 99 year old Capt (later Sir) Tom Moore who walked for miles to raise money for the health service, and 90-year-old Margaret Payne who walked up and down stairs the equivalent of climbing a high mountain to raise money for a hospice. Sadly the period has also seen an increase in loneliness, abuse and poverty to countermand the generosity of the general public. But I do not want to dwell on that aspect; I want to say a few words about what positive people have done for society.

The New Testament Gospel reading by Peter Brooks demonstrates that one person, a Samaritan, demonstrated that quality which characterises people in a caring society-charity. It is no different today – people still pass by on the other side as it were. In the Bible the word charity is synonymous with love, so let us think of it as both charity in the usual sense and of love in the biblical sense. The word therefore sums up the work of the NHS who gave of their best to support the community at a time of great need working over the odds in stifling heat inside their PPE with little relief time as there were extra shifts to work.

My mother was a nursing sister both in hospitals and the community but fortunately she did not have to work in such conditions as staff have had to suffer in the previous two years or so-but I do know from personal experience what efforts she as a caring nurse, doctors and other staff put in to relieve the suffering of others. I couple with this the staff who run the care homes and residential homes who also had to cope with extraordinary stress not knowing what the disease they were trying to protect their residents from would do next. There were high numbers of losses in these environments as you are aware. These people are the Samaritans of the day-they did not ignore their calling by walking on the other side of the road. They stayed and some of them ended up giving the ultimate sacrifice to continue their calling. We owe them a lot as we do the home carers who watched over their loved ones in their own homes.

Finally, I would also like to pay tribute to the Masonic community represented here. During the pandemic  you and they have demonstrated over the odds support for the community by taking the initiative in many different ways –locally support has been given to the making of PPE when it was in short supply, cheques have been presented to assist small groups to keep going to help vulnerable people with special needs, masons have created breakfast clubs, food banks, needy individuals have received financial support to keep families together after bereavement or loss of work – the current Lincolnshire festival culminating in 2025 will seek to raise over £2.25 million for Masonic charity with much of it returning to support Lincolnshire people.

Nationally Freemasonry gave £51 million to good causes with 18 million hours of volunteered time to help vulnerable people through the pandemic. Covid specific donations amounted to £4.7 million during this period. I am sure that you will all be pleased to note too that the Masonic appeal fund for the support of Ukraine now stands at £564k at the time of writing.

In conclusion, may I ask you in your prayers after this service in the coming weeks and months to think of those whom we have lost to the pandemic- people who most of you present will know closely or know of through others, think of those who have tried with all their strength to help those who have suffered in any way. We do not know what is around the corner and one thing this pandemic has done is to make people wary, frightened and nervous of living life as it had been previously – I have friends and you will have too that no longer socialise as much or go out as they did. Let us think of them too in our prayers and try as much as we can to be more charitable in both of its meanings let us try to be more like the Good Samaritan who is eternally admired for the strength of spirit he showed in the face of all of the social pressures around him and try to emulate those good qualities that he demonstrated.

Let us therefore feel hope for the future and a strong sense that those dearly beloved brethren that we miss so much today who have lived good, full and generous lives are still here with us in our hearts and minds for as long as their names remain with us – they will not be forgotten. Amen.