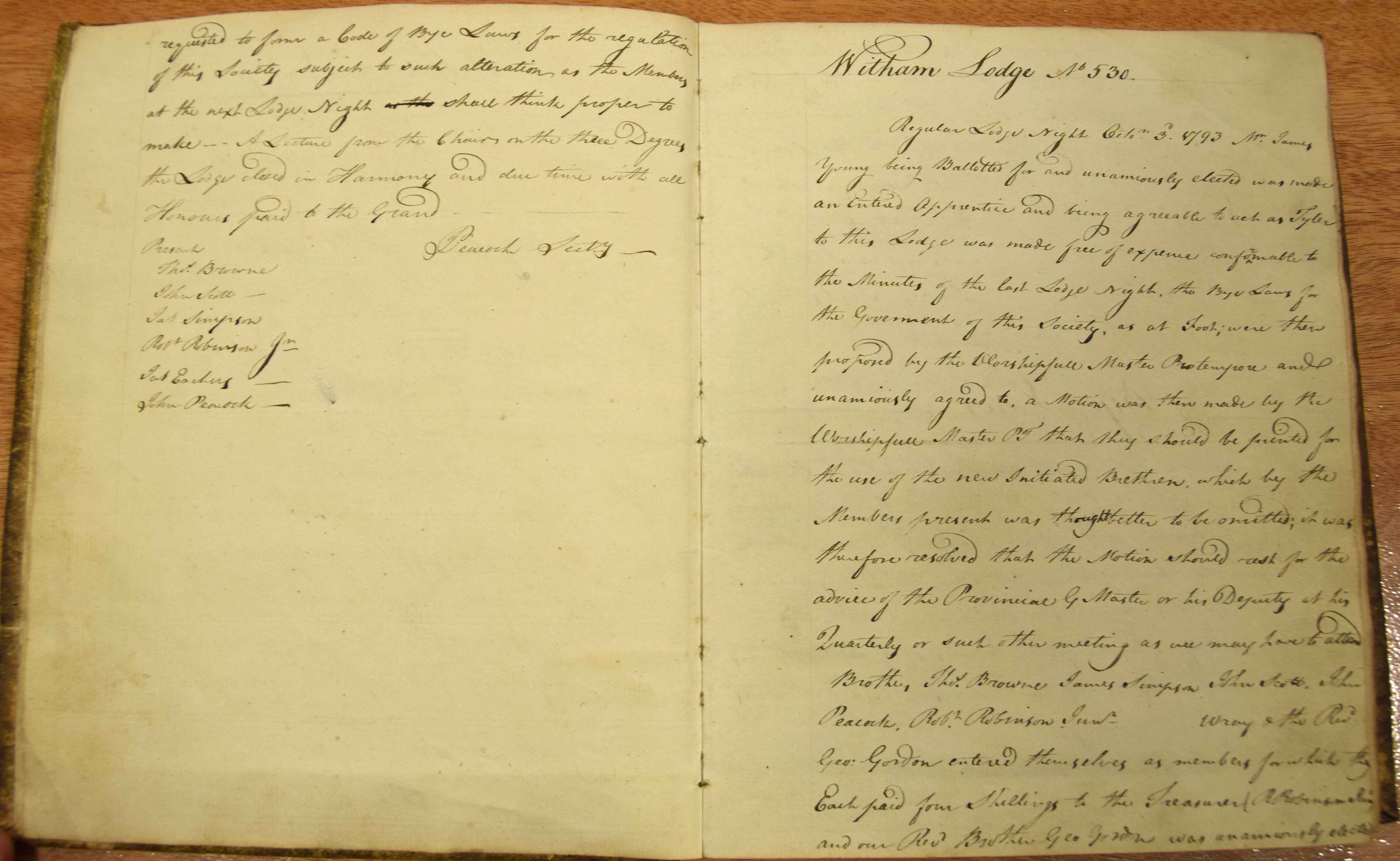 Pages of history: Minutes of this meeting of Witham Lodge record the initiation of Bro James Young, who was immediately elected Tyler...

The older the Freemasons’ lodge, the lower its number, Right? Well, not necessarily – as in Lincolnshire, where the oldest lodge has the second-lowest number. That apparent contradiction, with Witham Lodge 297 being older than Lodge of Harmony 272, set Nick Brown thinking:  Surely 272 should come first. Nick takes up the story: “It got me thinking, and I found the answer in a book which I recommended to your perusal – A History of Freemasonry in Lincolnshire by William Dixon, published in 1894.

“According to Dr William John Stukeley, the noted antiquarian, physician and clergyman, he established the first Masonic Lodge in the Province at Grantham in around 1726, when he took up a post of vicar of All Saints church in Stamford. Stukeley is regarded as one of the founding fathers of modern archaeology, and surveyed both Stonehenge and Avebury. It is known, due to his extensive diaries, he became a freemason in 1721 and was one of the founding fathers of the Spalding Gentlemen’s Society and a friend of Sir Isaac Newton.

“No record of this Lodge exists in Grand Lodge. However, though verbal agreement could have taken place between Grand Lodge and Stukeley. The first validated record of a Lodge in the Province is in Lincoln is Lodge number 73, that met at the Saracen’s Head from the 7th September 1730. Minutes covering three years, and some by-laws, still exist.

“The Province of Lincolnshire was formed in 1792 and Rev William Peters was the first Provincial Grand Master, holding the post for 22 years. In 1793 the Witham Lodge was founded in Lincoln. So why does Harmony Lodge have a lower number? Harmony’s warrant bears the date of 20thAugust 1789 – a month after the French revolution – yet Harmony started in Northampton. It moved to Boston in 1806, and therefore though older, Witham is the Lodge which has been in Lincolnshire the longest. Therefore Witham claims precedence, and is placed at the top of the list even though it’s actually three years ‘younger’.

“Clearly there are many other points of interest in a history of some 300 years. The Yarborough lodge in Gainsborough was originally called the Trent Lodge, and changed its name to honour the Earl of Yarborough in December 1849. The first Lodge in Sleaford was called Hope, and though it no longer exists the name of Hope Chapter stands as a reminder. The writer of the opening ode was a Lincolnshire mason and the famous masonic writer Dr George Oliver lived in Lincoln and was the deputy Provincial Grand Master.

“As the list of Lodges in the United Grand Lodge of England passes 10,000; 10001 being Juno – the Lodge of the University of Hull – the history of Freemasonry in the area all around us in our traditions, rituals and landmarks and buildings. Today there are 21 masonic centres and 74 lodges. The 75th  will be the Free Wheelers Lodge 9991, which would have been consecrated in May had not Covid-19 restrictions forced the ceremony to be postponed. That delay is part of our History, and as we grow, we look forward to a bright future.”