MCF gives £63,000 to Lincolnshire to provide friendship in times of crisis 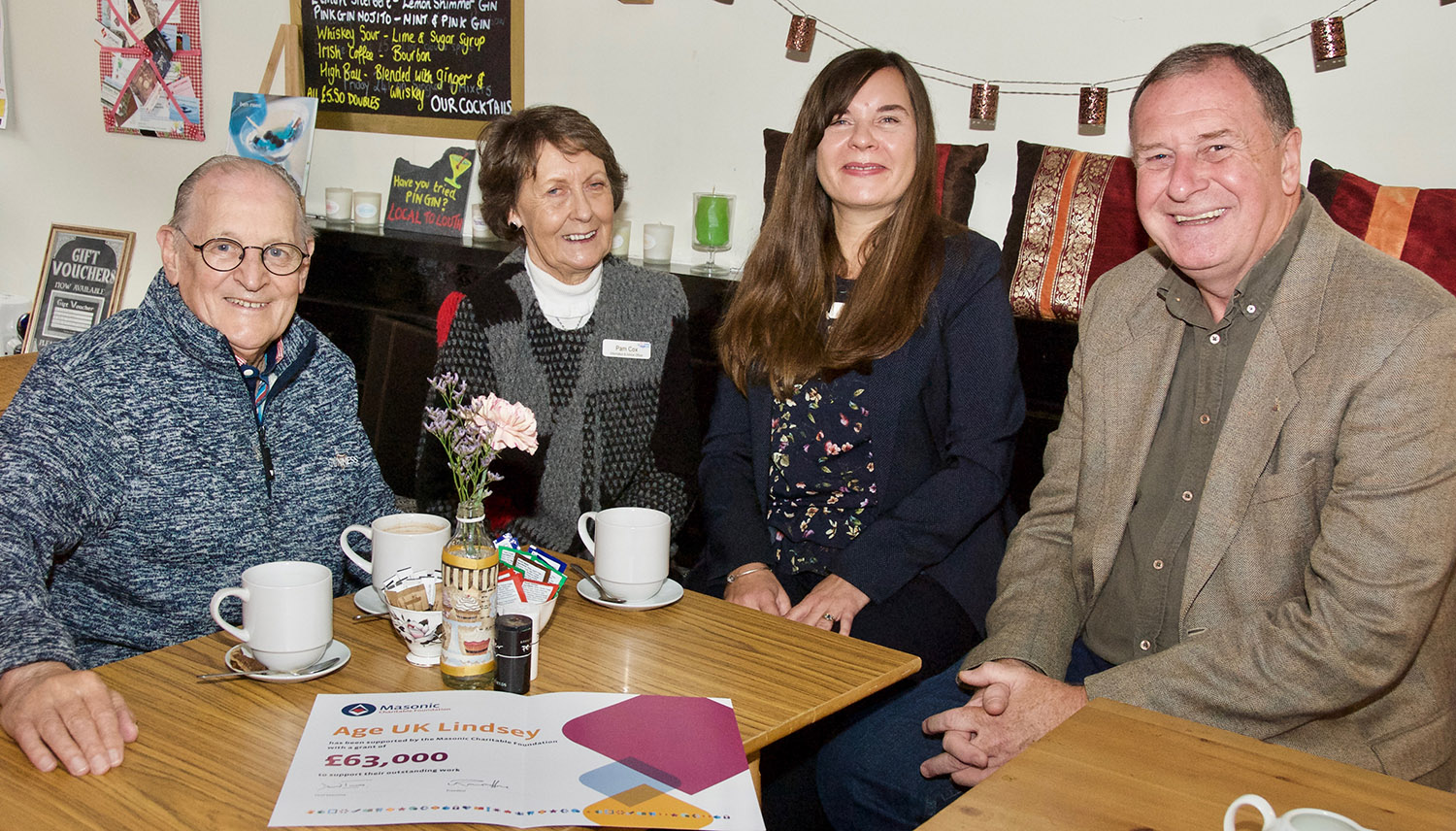 Through the generosity of Lincolnshire’s Freemasons the Masonic Charitable Foundation has been able to support Age UK Lindsey with a donation of £63,000.

The life-changing donation is part of a £1m project called Later Life Goals, launched nationwide to support the charity’s work in reaching out to enhance the lives of many hundreds of lonely and vulnerable older people.

In Lincolnshire in this year alone that translates to one-to-one intervention on behalf of 262 people undergoing major transitions in their lives such as bereavement, serious health diagnosis, or a partner moving to a care home.

Age UK Lindsey works across East and West Lindsey and North Lincolnshire, helping to make later life a fulfilling and enjoyable experience by providing a range of direct services, advice, and domestic support.

This can include help to access benefits, liaising with care agencies, or simply a weekly befriending visit.

Peter Tasker, almoner at Vigilantes Lodge in Cleethorpes, set up the link with Age UK, whose Service Manager Sue White said demand for the services they were able to provide continued to flood in. “We have an average of 200 new referrals for our information and advice service every month, and 30 new requests for our befriending help on top of that. Our services are always up to capacity, and so many callers have nowhere else to go. We can’t thank you enough for this donation; it will help us to sustain our services to people who otherwise might have no help at all.”

PGM Dave Wheeler said: “The work of Age UK Lindsey is vital for so many people in rural Lincolnshire. I’d urge brethren to volunteer to help with the befriending service. It involves an hour week of a chat over a cup of tea, but it can be a lifeline for someone. Contact info@ageuklindsey.co.uk to find out more.”

Let’s start by making it plain that ‘Donald’ isn’t the real name of the man in this story, but the story itself is all too real. Donald and his landlord wanted us to share it to show how Age UK Lindsey, with the support of Lincolnshire’s Freemasons and the MCF, had turned his life around.

Serious financial problems, and the worry they brought, were making Donald ill. He wasn’t sleeping, and he couldn’t see a way around his difficulties.

Eviction was a very real threat, but his landlord, (let’s call him John), didn’t want it to come to that. He told us: “Donald is in his 70s, and relies on his state pension and a relatively modest housing benefit award. His financial situation was causing him distress and anxiety.”

John contacted Age UK Lindsey, at which point volunteer Pam Cox entered the story. Said John: “Donald and I met her two or three times, and she was instrumental in getting him a higher level of attendance allowance and improved pension credit, which allowed him not only to clear his rent arrears, but made him £150 a week better off.”

Pam, who volunteered to help Age UK for six months almost ten years ago, and has never left, said there was as much as £1m in unclaimed benefits in the system. “But the application process can be very difficult,” she said. “Even if you understand the system, and how to fill in forms, it can take as long as two hours to complete one application, and that can be a barrier to people applying.”

John said: “I really cannot stress enough just how magnificent the work of Age UK Lindsey has been.  I’m full of admiration for the organisation, and Pam Cox in particular. It’s an excellent organisation, and its work can’t be commended highly enough.”

Donald, given such vital support, is now very happy with this life. The anxiety has gone, and with a smile on his face he was able to say: “I’ve just been to see the doctor. He says I’m 400% better than I was. I’m cheerful again.”

The MCF is one of the largest grant-making charities in the UK, supporting Freemasons and their families as well as charities across England and Wales. Its work is funded solely through the generous donations of Freemasons, of which there are about 3,400 in the historic county of Lincolnshire, and it donates more than £5m to worthwhile causes every year.