Provincial Almoner to step down after 13 years in the role

Lincolnshire's Provincial Almoner John Grimwood, who'll step down from the role in May.

As John Grimwood steps down as Provincial Grand Almoner he reflects that although the commitment to helping members hasn’t changed, the means of delivering support are dramatically different from when he began.

He has been in the role 13 years, having started before the creation of the MCF in 2016, which brought together the work of four charities. “There have been lots of changes, and all for the better,” said John. “The system is now faultless; it’s simpler and it runs like clockwork. In the old days every application came over my desk. I knew every case, and there were lots of envelopes and postage. That’s all changed. People can phone the helpline number to contact London to ask for confidential help. They don’t need to tell me or their Lodge Almoner.

“The Lodge Almoner used to be the front man and I was the intermediary. Now any member can phone the helpline in London, and trained people employed by the MCF will get involved. They’re the ones who help with the most difficult cases.”

Also in the old days, support was given via cheques moving from London to the Provincial Treasury, then to the Provincial Almoner, then to the Lodge Almoner, and finally to the individual being helped. That’s all changed, and money is paid directly to where it’s needed. The pandemic increased the workload for MCF employees in London, with more financial support needed.

John freely admits that he started the role ‘blind’. “I had never even been a Lodge Almoner,” he said. He relied totally on Mrs Avis Slater, widow of his predecessor Keith Slater. “She was my assistant for ten years and will retire as a visiting volunteer when I retire in May. I thank her for her kindness, help, support, and good humour.

“There is an enormous list of others I need to thank, especially the Lodge Almoners, the numerous people at Great Queen Street, many of whom I have met for help, advice, and support, all the members of the petitions committee, Graham Ives for appointing me when he was PGM, and Dave Wheeler for retaining me when he took over. “It has been an honour and a privilege to serve the Province of Lincolnshire as its almoner for 13 years. It was always pleasing when an application to London or Petition to the Province for assistance was approved. That was always the most rewarding.” 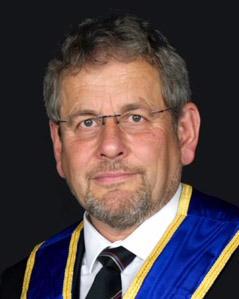 Charles Jackson, left, of Lord Worsley Lodge in Cleethorpes, will be the new Provincial Grand Almoner.