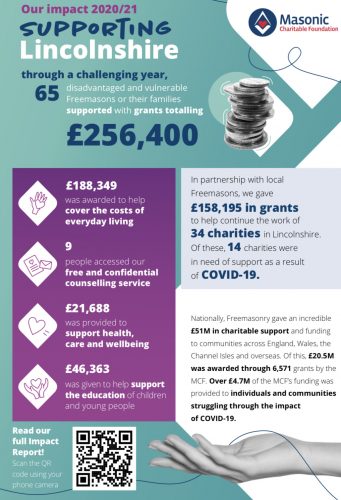 Perhaps one of the most quoted questions is “What have the Romans ever done for us?” The question is asked by Reg, the leader of the People’s Front of Judea, in the film Monty Python’s Life of Brian, writes Pete Tong, Provincial Charity Steward.

The ridiculousness of the question is made abundantly clear as the group lists the benefits – aqueduct, roads, sanitation, medicine, education… and, of course, the wine. In truth the Romans brought many benefits, if only he’d take a minute to think about it. So, I ask you the question: ‘What has the Masonic Charitable Foundation ever done for us?’

That figure is over £50,000 more than during the last year. In partnership with us, they gave £158,195 to help continue the work of 34 charities in Lincolnshire. 14 of those charities were in need of support because of the Covid-19 pandemic. That is a staggering £126,710 more than in the previous period – and this was at a time when many charities, large and small were struggling to get funding to support them in their work.

Such is the strength of your charity, the Masonic Charitable Foundation that it was able to support charities who desperately needed funding during a time of worldwide crisis …but that strength comes from you and can only come from you.

In total in 2020/21 this Province has received £414,595, and sits comfortably within the top one third of Provinces to benefit from MCF grants.

None of this would be possible though without your support and the support you are giving through the Festival. Over the five years of the Festival we will raise at least £2,250,000. On the basis of the grants and support we have received in the last twelve months we will, during the eleven-year cycle of Festivals, get back a staggering £4,560,545. As the financiers say, ‘That’s not a bad return on your investment.’