Chris writes winning caption in week 11 of our competition 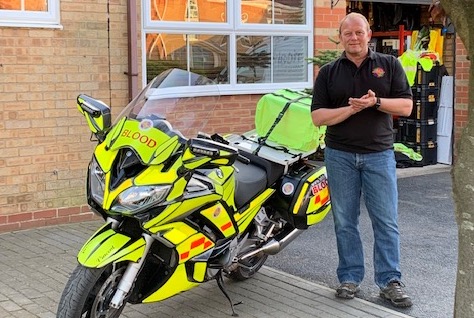 Karl Fidoe and the blood bike

While lockdown has been frustrating for many of us, there are many examples of Freemasons using their extra time to make a real difference to their communities during the pandemic.  Few though can have been as dramatic as Karl Fidoe’s shifts with the Lincolnshire Emergency Blood Bikers team.

A self-employed electrician by trade, Karl had to down tools in March along with most of the UK. “Contracts dried up,” he says. “People didn’t want us in their houses. I went five weeks without a single job.  Now it’s back with a vengeance to six days a week.”

Fortunately, Karl was able to turn his attention to other interests during the hiatus.  With his love of biking and a ROSPA Advanced Riders course under his belt, Karl has been working voluntary shifts with the county’s Blood Bikers Scheme for the past two years. With the NHS under severe pressure from the Covid19 outbreak, Karl saw his chance to make a significant contribution.

The Lincolnshire scheme is one of 31 such charities belonging to the Nationwide Association of Blood Bikes (NABB) which cover nearly the whole country with more than three thousand volunteers providing a free courier service to the NHS. The bikes deliver urgently-needed items such as plasma, test samples, breast milk donations and documents.

Karl’s volunteer session usually comprises a twelve-hour weekend shift, both day and night.  Each shift starts at either 7am or 7pm, with the preceding volunteer delivering the bike to the person next on shift.  Karl says the day shift starts early: “I’m up for 6am and dressed in my motorcycle gear with the phone nearby ready for calls from 7 o’clock”.  He adds: “Sometimes the call is quick to come but other days, you can be waiting for hours for that first call, which can be frustrating.  It’s the anticipation that gets you! However, once that phone rings, the adrenalin kicks in and you’re off.”

Once the call comes in from control, the rider needs to be on the road within fifteen minutes.  Many of Karl’s assignments during the pandemic have involved delivery of Covid-related blood samples: “The NHS has real confidence in blood bikes to deliver safely and quickly,” he says.  “It’s rewarding work too.  On my last shift, I had to collect Covid samples from Grantham Hospital and take them to Sheffield.  The consultant himself came out to give me the package and told me what an excellent service we were providing, saying they couldn’t do this without us.

“Within an hour I was at Sheffield hospital with twenty samples, and a similarly enthusiastic response from the staff there.  You walk away with a feeling of pride and that you’ve done something to help.

“The biking is exciting.  We stick to speed limits of course. As advance riders, safety is paramount and we’re not classed as emergency response.  That said, people do think we’re ambulance workers – because of the livery on the bikes I suppose – and some stand and applaud as we pass.  It can be tiring when you’ve been on the road for six or seven hours, but when you switch that phone off at the end of a busy shift, you feel you’ve made a real difference.”

Freemasonry has played a big part in Karl’s life since his initiation at Lindum Lodge in Lincoln in 1996.  He’s now the Lodge’s DC, and is a member of the current Craft team.

“Freemasonry played a big part in my desire to help out in the community,” he said. “I’m now a much more rounded person in my relationship with other people; much more tolerant.”

Karl readily acknowledges the backing of his wife Michelle.  “She’s totally supportive both of the Freemasonry and the blood biking. We’re both really keen bikers and regularly travel to Europe on our BMW GS1200”.

Karl is one of the founders of Lincolnshire Masonic Motorcycle Club, and is also involved with the creation of Free Wheelers Lodge 9991, which was due to have been consecrated on May 16th this year – but the ceremony had to be postponed because of Covid-19 restrictions.