Lincolnshire Freemasons step up with biggest-hearted gesture yet!

Walking duo hand over £4,500 for #Lincs2025 Festival – and pledge a repeat performance

Lincolnshire’s 3,000 Freemasons have committed to further community support by pledging to be a major sponsor of next year’s street art project supporting St Barnabas Hospice.

The 2022 art trail will see four-foot-tall hearts not only in Lincoln, but in every town in the county where St Barnabas has a physical presence, supporting more than 10,000 people a year suffering terminal illnesses.

Said Provincial Grand Master Dave Wheeler: “Lincolnshire Freemasons’ decision to be a Presenting Partner for the 2022 HeART Trail reinforces our long-term commitment to the Hospice movement in general and St Barnabas Hospice in particular. 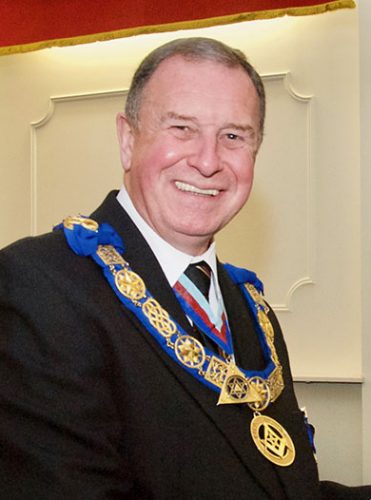 “Our support for the hospice movement is, by extension, support for all those people in our communities whose lives are touched by its services; not only those  suffering terminal illnesses, but also their families and friends. In this way, the money invested in being a Presenting Partner is an investment in making some of life’s most difficult times a little more tolerable.

“For that reason, the St Barnabas Hospice choice of the heart as the artwork to symbolise its ongoing commitment to dignity and compassion in the end of life care is especially appropriate in the year of its 40th anniversary, and Lincolnshire’s 3,000 Freemasons are delighted to be associated with it.”

In April artists will begin painting up to 40 hearts to be displayed across Lincolnshire from Skegness to Stamford, with at least three hearts in each location the hospice has a physical presence, including Louth, Grantham, Gainsborough, and Boston, as well as Lincoln. St Barnabas, which employs about 300 people and is supported by more than 1,000 volunteers,  hopes to boost revenues for Lincolnshire businesses by attracting more than 500,000 visitors to the county, and to involve at least 30,000 schoolchildren in a curriculum learning project.

It’s hoped the HeART Trail can go live on July 2nd next year, (restrictions permitting!) and run until September 16th.