Uncover some mysteries of the Royal Arch in this #SolomonLive presentation

Ex-Lincolnshire Police Inspector David Day is taking on a sponsored walk of Wainwright’s Coast to Coast aiming to raise at least £500 in towards the Lincolnshire 2025 Festival in support of the Freemasons’ charity the MCF.

The official mileage using Alfred Wainwright’s route is a weary 192 miles. David will average 16 miles a day over the 12 days, carrying all his gear in his rucksack and staying in B & B’s. He aims to be breakfasted, boots on and away by 8am each day and finish by 4pm latest, allowing plenty of recovery time for the next day. 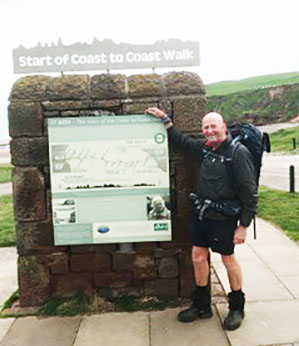 A solo walk of this length through some really difficult terrain does bring challenges, especially when the weather turns. Navigation can be testing and when the mist comes down that’s when David, of Bayons Lodge at Market Rasen, will need his navigational skills.

Leaving home in late June, David’s route is from St. Bees in industrial West Cumbria, through the Lakes, over the M6, into the Dales, passing under the A1 at Catterick Bridge, across the Vale of York, into the Cleveland Hills and then the North York Moors – Heartbeat Country – with his first sighting of the North Sea before finishing 12 days later at Robin Hood’s Bay.

Tradition is to wet one’s boots in the Irish Sea at St. Bees, pick up a small pebble then dip boots again and throw the pebble in the North Sea at Robin Hoods Bay, where David’s wife Carole will meet him at the top of the hill and they will walk down the steep hill into Robin Hoods Bay together.

Hopefully you’ll be persuaded to fall into step with David, pictured here on another coast-to-coast walk, with a little sponsorship, which you can do on his Just Giving Fundraising Page: https://www.justgiving.com/fundraising/neil-hollingsworth