Heart of Oakes: David’s lockdown lunch deliveries earn thanks from Chancellor of the Exchequer

David has the last laugh in our caption competition 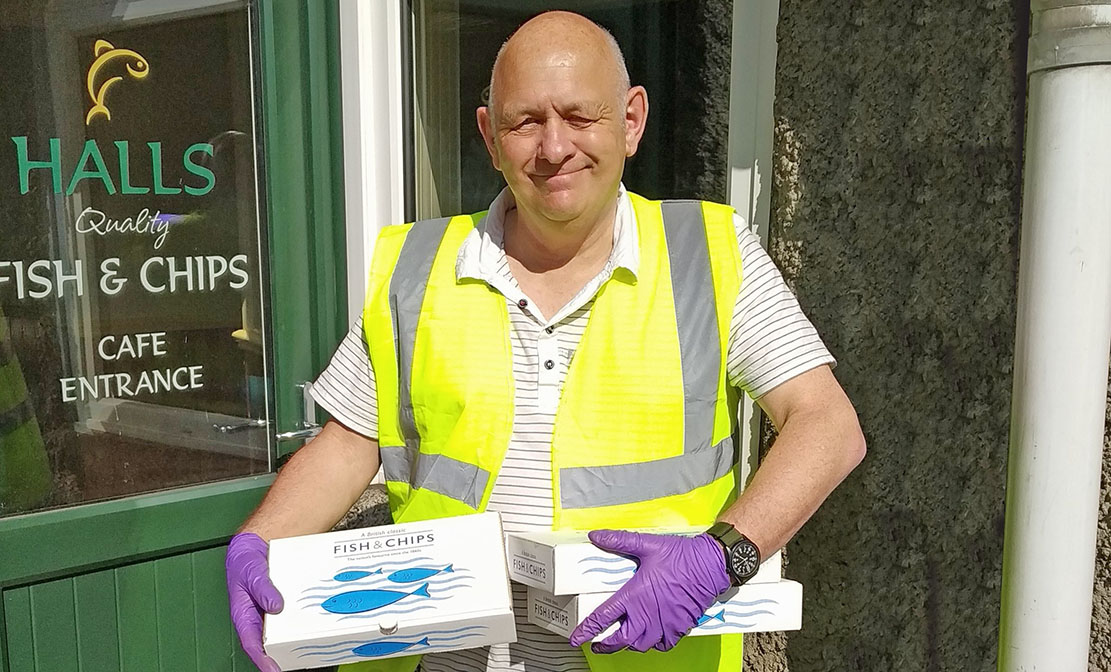 David Oakes sets out on another fish and chip delivery run

When the chips were down, former Lincolnshire Freemason David Oakes stepped up to the challenge to deliver hot food to vulnerable people shielding during lockdown in his adopted Yorkshire Dales town of Bedale – and his efforts have been rewarded with the thanks of his MP, Chancellor Rishi Sunak.

In a letter that dropped through David’s door out of the blue, the Chancellor wrote: “I was so pleased to hear recently of the very important contribution you made to efforts to protect the vulnerable and isolated in Bedale during the worst of the coronavirus pandemic. 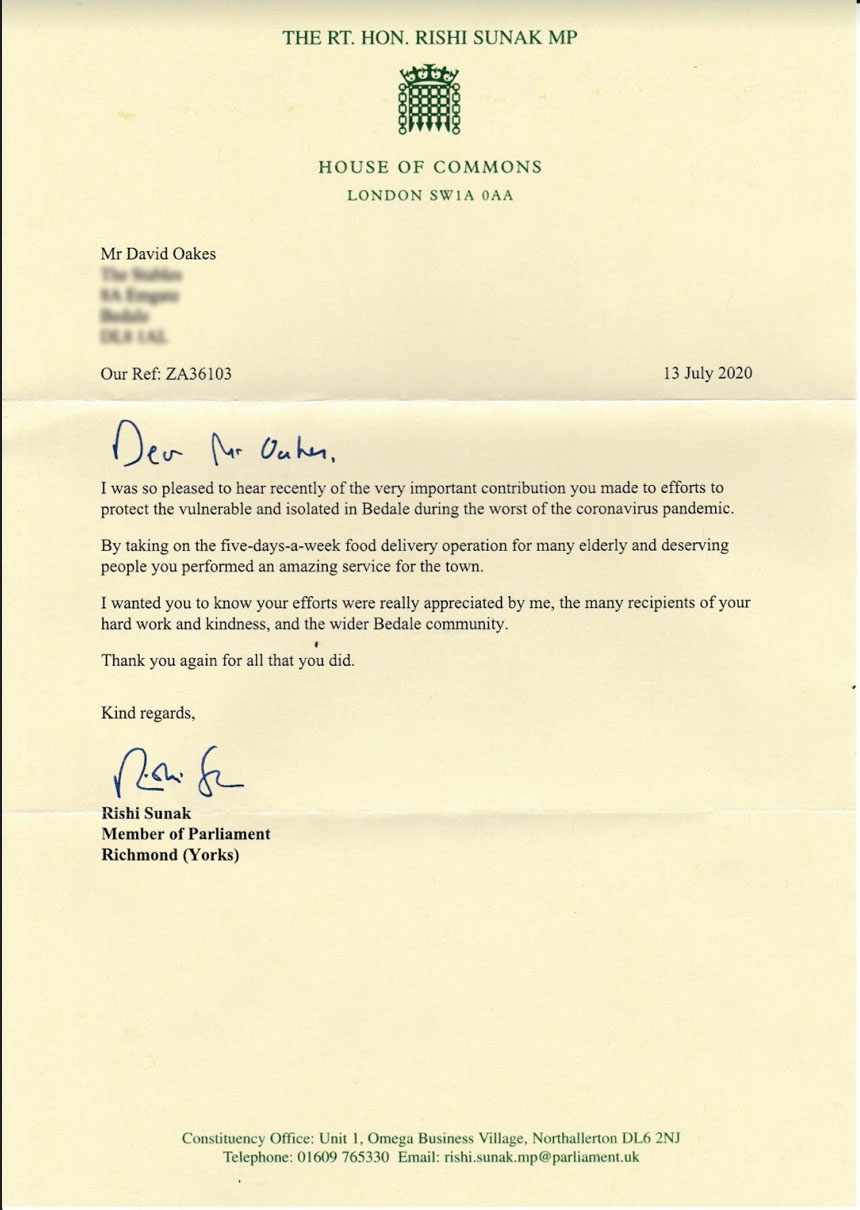 “By taking on the five-days-a-week food delivery operation for many elderly and deserving people you performed an amazing service for the town.

“I wanted you to know your efforts were really appreciated by me, the many recipients of your hard work and kindness and the wider Bedale community.”

David was delivering free hot food to a maximum of 57 people in the town every week – a five-day-a-week Tuesday to Saturday schedule involving fish and chips from Stephen Hall’s chippie in the town, both lunch and teatimes, also soup deliveries on a Monday from the nearby Hummingbird Cafe.

David said he just had to do something to help when lockdown struck. Working as part of the towns Mutual Aid Group he collated all the requests for hot food delivery and made sure everyone was served. He looked after those in Bedale, and was supported by other volunteers in nearby villages.

He said: ” The people we were delivering to were really grateful. Fish and chips is such traditional comfort food, and people looked forward to the delivery. I didn’t have too much time to chat when I made the deliveries, because I had other meals in the car that were in danger of going cold, and I didn’t want that to happen.”

However, retired policeman David discovered that one elderly lady in the town had been in the Force herself, policing the East End of London in the Sixties. “I have promised to go back and visit her when we’re allowed into each other’s houses again,” he said. “I’m sure she’ll have some wonderful stories to tell. A number of other people also invited me back for a cuppa when we all return to the new normal”

David left Lincolnshire to live in France for a while before coming back to Britain – “When the Brexit vote happened I thought it would be better to be at this side of the Channel,” he said – and believes he has more reason than most to be enjoy life. He came within a hair’s breadth of being paralysed after breaking his back in a fall. “The doctor likened the injury to my back to pushing your finger into a balloon. The balloon yields at first, but then the pressure becomes too much, and it suddenly bursts. That’s how close I came to paralysis, so I’m especially grateful for the way things turned out – but my  back was a bit sore by the Sunday with all the getting in and out of the car,” he added. “I also think the food deliveries helped with people’s mental health. To have a visit and a quick chat, when sometimes I was the only visitor for that person, I hope helped. The daily contact with folk certainly helped me.”

David is a Past Master of Hamilton Lodge No 1600 at Alford, as well as a number of other orders. He is now a member of the Bedale Beresford-Peirse Lodge No 2610 in the Province of Yorkshire North & East Riding. When we are able to meet again, David hopes to be able to make some visits to Lincolnshire, especially to a Provincial Grand Lodge meeting, and to the consecration of the new building at Louth.

Bedale’s Mutual Aid Group Co-Ordinator Brian Cook said: “David and Stephen are shining examples of the generosity, kindness, and dedication which has been shown by so many of our volunteers during the crisis.” David added: “We were just showing simple old-fashioned community spirit.”