Keith walks on through injury to raise £2,000 for children’s charity 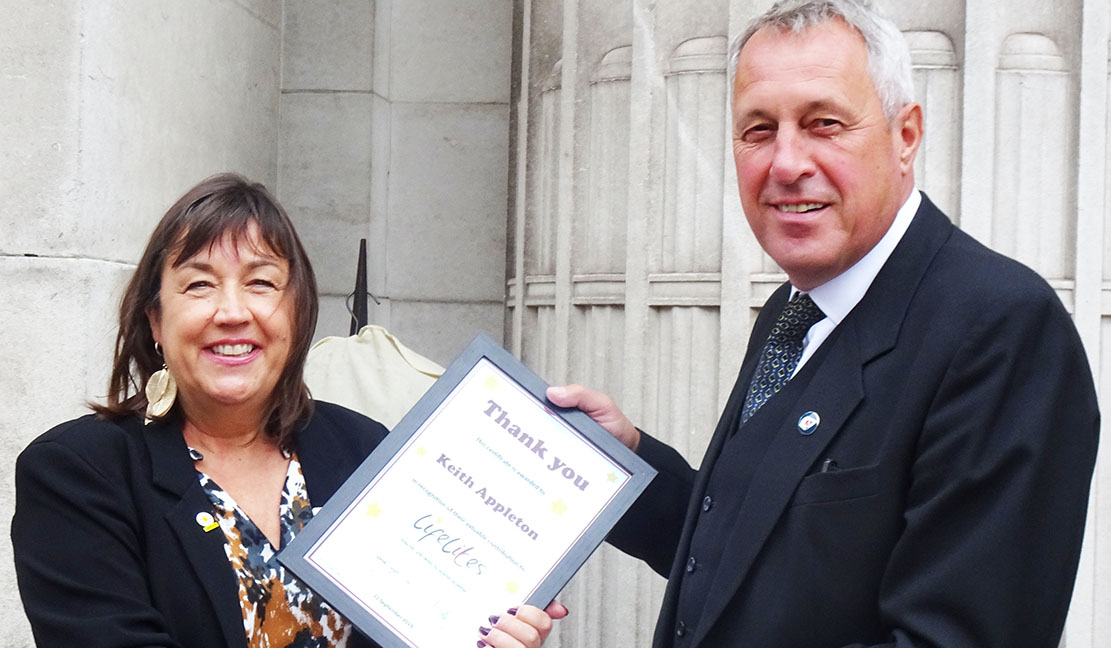 After Keith’s overnight walk his efforts in raising £2,000 for Lifelites were formally recognised by the charity’s Chief Executive Simone Enefer-Doy when they met at Freemasons' Hall on the day of September's Quarterly Communication meeting.

Lincolnshire’s Provincial Registrar Keith Appleton has walked 42 miles through the night to raise money for the children’s charity Lifelites – and his efforts have been recognised the the charity’s Chief Executive.

He was following the White Rose Walk, a long-distance walk set up in 1968 by the Yorkshire Wayfarers. Its start point is the Yorkshire village of Kilburn, which he left at 10.20pm bound for Roseberry Topping, a National Trust property in the neighbouring county of Cleveland.

The walk is completed by touching the ‘trig’ point at the summit of Roseberry Topping. By the time he got there Keith had has raised £1,960 for the charity, but had pulled a calf muscle with four miles yet to go. “That slowed me considerably,” he said. “But I knew people had committed money, and that thought was my incentive to carry on and make sure I finished the walk.”

Nevertheless, it was ‘job done’, since the objective is to complete the distance in less than 24 hours, which Keith did with time to spare. But the sight that greeted him was really unexpected. “At the top of Roseberry Topping there was a group of Royal Marines with a rowing machine raising money for Help the Heroes. I declined to take part,” he said.

Even though the walk was officially over, Keith still had a couple of miles to go to meet his lift, which whisked him off for a couple of pints of Guinness and a hot bath. “But I’m still accepting donations,” he said. “I am happy to take a cheque posted to me at 24 Gloria Way, Grimsby DN37 9SW.”

Keith intends to hand over the money to Lifelites raised when he visits Grand Lodge for the next Quarterly Communications meeting in September. The charity donates specialist assistive technology packages for children and young people suffering life-limiting illnesses, allowing them to be creative, control something for themselves and communicate, for as long as it is possible. Every baby and children’s hospice throughout the UK benefits, which means the charity has reached more than 10,000 children.