As the world battles through the Coronavirus crisis, it would seem we have been here before. Records held by the Spalding Gentlemen’s Society tell the story of the arrival in the UK of bubonic plague. The story, re-published below from the Society’s web site, contains uncanny echoes from the past… 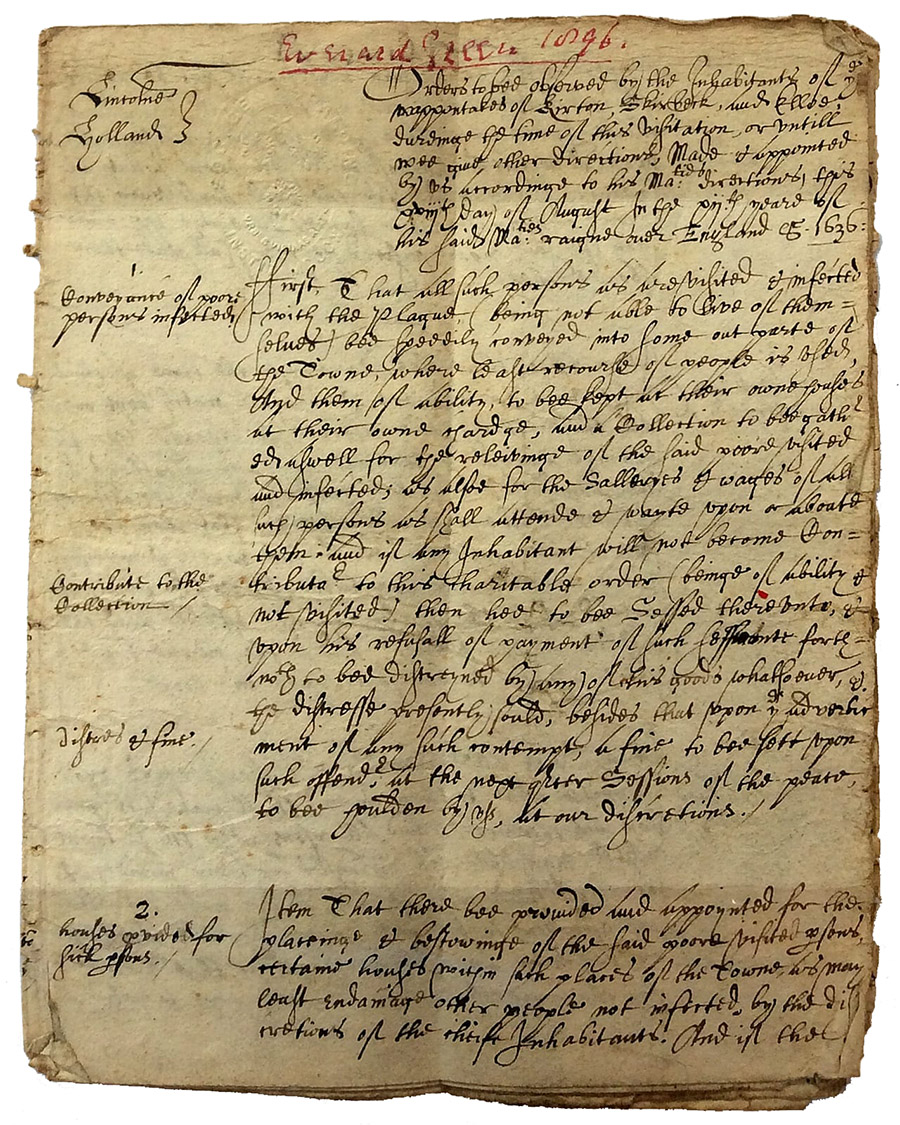 In the autumn of 1635, a ship docked at the Norfolk port of Yarmouth. It probably looked little different from the many other ships which plied their trade across the southern North Sea, between the coast of Germany and the Low Countries, and the harbours of eastern England. Hidden in its hold, however, lay a secret which would take time to unravel. Similar ships arrived at Hull and North Shields. What they had in common was the deadly cargo they carried: bubonic plague.

Victims of the disease at first suffer severe flu-like symptoms, followed by fever and the appearance of agonising swellings in the lymph nodes, particularly in the armpit and groin. The disease is caused by the bacterium Yersinia pestis, which is transmitted by fleas which commonly live on small rodents such as rats, from which they can make the jump to infect humans. It was particularly deadly in towns and cities with overcrowded tenements and filthy, congested streets, where people and rats lived cheek by jowl. By the hot summer of 1636, the plague had spread from its original points of arrival, and was causing heavy loss of life in Newcastle and London. In the capital alone at least ten thousand people died.

In the archives of the Spalding Gentlemen’s Society (SGS) is a fragile document which is clearly not written by a professional scribe and is often hard to read. It contains “Orders to be observed by the inhabitants of the wapentakes of Kirton, Skirbeck and Elloe during the time of this visitation, or until we give other directions. Made and appointed by us according to His Majesty’s directions signed 18thday of August in the twelfth year of his said Majesty’s reign over England that is 1636.” (Wapentakes were the ancient administrative districts into which much of eastern England had been organised since Danish times. Elloe incorporated much of what is now the district of South Holland.) Knowing where the disease had first been reported, people in this area must have been looking anxiously over their shoulders at the port of Boston a few miles away.

The Orders concerned were handed down from King Charles I and his ministers. Responsibility for preventative measures and the care of the sick was placed in the hands of local magistrates and officials, and the document contains six signatures, presumably those of the relevant Justices of the Peace. The Orders are surprisingly detailed: infected persons unable to care for themselves, and with no-one to look after them, were to be taken to isolation centres outside the town or village, in many cases probably no more than a barn or other farm outbuilding. If an infected person lived with their family, all residents were to be quarantined in their home, notionally for forty days, until all evidence of disease had passed. The regulations even required the slaughtering of cats and dogs which strayed out onto the street (hence, ironically, aiding the spread of the rat population).

Temporary officials were appointed to ensure these regulations were followed, the cost being met by a levy on all those of sufficient means not affected by the plague. In Spalding, eight ‘wardsmen’ were to guard the entrances to the town, two at ‘Mr Johnson’s bridge’, two at the High Bridge, two at Pinchbeck Lane and two at Windsover end.

Centuries ago, the plague’s cause was the subject of wild speculation: was it miasmas (poisonous vapours), divine punishment for human sinfulness, or the malign effect of comets and planetary alignments? The uncertainty made life difficult for physicians. A number of remedies were tried, but doctors were largely powerless to treat the victims; all that could be done was to isolate the patient and wait for the disease to run its course. Burying the dead quickly was a high priority, and often took place at night, but during severe outbreaks graveyards quickly filled up, and new ones had to be dug hurriedly in whatever open space was available.

Some time in the 18th century bubonic plague seems to have largely disappeared, at least in Europe, for reasons which are not fully understood. In our time, we can barely begin to imagine the chaos and terror which outbreaks must have caused (although the reaction in recent years to the threats of coronavirus, avian flu, and Ebola offer a clue), but the SGS document indicates that society was fighting back in the only practical way it could, even though locking up the sick and healthy under the same roof must have contributed to the death toll. The Spalding registers of burials for 1636 and 1637 do not in fact suggest an unusually high level of mortality, and it may well be that this particular outbreak exhausted itself before it reached some rural areas.