A flamboyant playwright, a surgeon, and an architect went into a pub… No, not the opening line of a 19th-century stand-up comedian’s routine, but the starting point for a potted history of the birth of Grantham’s Doric Lodge.

It was written by the Lodge’s current master Ralf Galloway, who had based a playlet on early Lodge minutes, casting himself and other Doric members in the principal roles.

It was performed at the Lodge’s 200th birthday party, and its roles were those of people who had been at the first meeting, including John Langwith, the Lodge’s first master. Ralf had the character say: “I must tell you that this is the second Doric Lodge that I am involved with, as I was also part of the first or Old Doric Lodge founded in 1791 which lasted for only five years.

“Do not ask what happened. Well, if you really want to know… We just did not get on! I mean the Doric Lodge members and the Provincial Grand Master William Peters, that is. No, we did not see eye to eye. We were even accused of contumacy. Google it if you do not know what that means… sorry, of course you can’t do that in the 19thcentury. It means a wilful disregard for authority. I mean, honestly.

“The last thing we want is for somebody to name a Lodge after him,” he added, with a wink to members of the current William Peters Lodge, which also meets in Grantham.

He went on: “Anyway, let bygones be bygones, I say. My advice would be: try to get on with your Provincial Grand Master. Seriously! It doesn’t matter whether he is a clergyman, a solicitor or even, God help us, a constable.” This time with a nod towards the current PGM Dave Wheeler, a former police officer.

“This right worshipful Lodge stands open in the name of God and the holy Saint John, forbidding all cursing and swearing, and whispering, and all profane discourse whatever, under no less a penalty than the majority of the brothers and fellows here present shall think proper.”

Ralf’s reference to why the Lodge, having originally met at the Angel, decided to move to the Granby Inn, was something 21st-cetury Freemasons would be able to understand. He said: “There is something wrong with this beer. It smells like old socks and tastes like vermin’s urine. Get a dispensation from the APGM to change from the Angel to the Granby Inn. The beer is better, and it’s a halfpenny cheaper.”

Wearing their tricorn hats the acting brethren gathered around for the reveal of a tracing board, of which the John Langwith character said: “Before you leave, Brethren take a look at the tracing board. I have delineated for your instruction and guidance one of the core values of Freemasonry. One that is not mentioned often enough and of which, as such, the uninitiated and popular world has no knowledge.”

Said one of the brethren: “But WM, that is a Smiley face!”

Langwith replied: “Stupid boy. It might be a Smiley face to you. But as we are not all operative Masons but rather free and accepted or speculative we apply that Smiley face to our morals. And in this sense it represents happiness!”

When the Master was speculating about what the future of the new Doric Lodge would bring in the next 200 years, W Bro David Sprawson, acting as PM and ‘the oldest Brother in the Lodge’, gave an informative and humorous reading of its history. A version prepared by W Bro Alan Newton and given to members at the Festive Board can be read at this link. 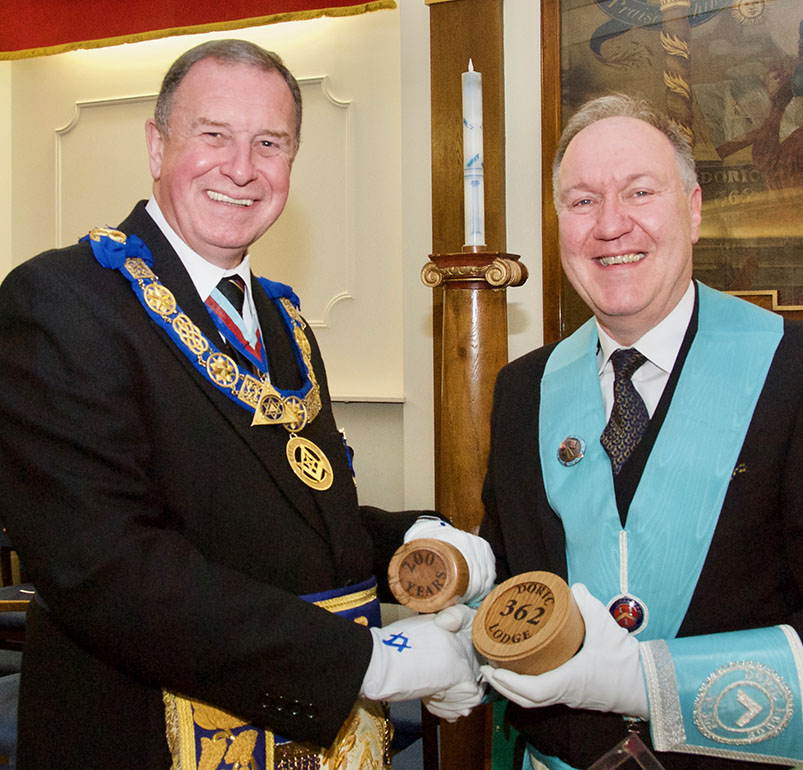