A force to be reckoned with… 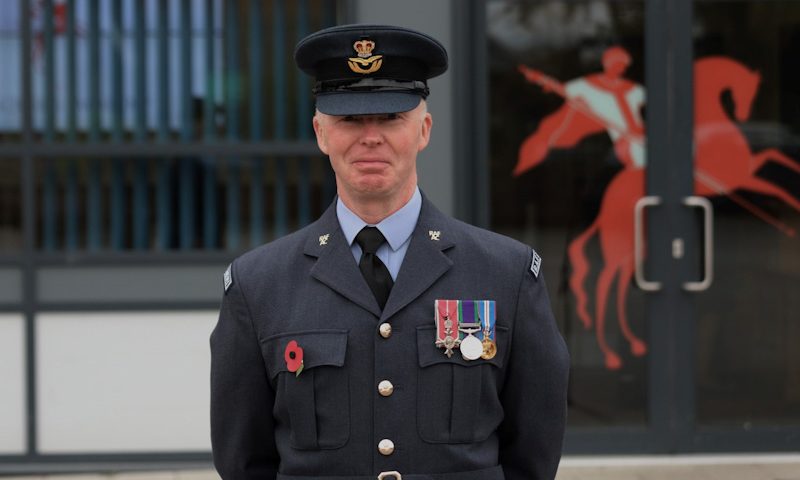 A 16-year-old who secured his Rolls-Royce apprenticeship ahead of almost 6,000 others through the positive approach to life he learned as an RAF cadet is an example of what’s being achieved thanks to work led by a Lincolnshire Freemason.

He’s Bob Chalklin, currently Master of Daedelus Lodge in Sleaford, who is also the Wing Commander responsible for the RAF dimension of a government initiative to expand the number of cadet units in schools to 500 nationwide.

With the RAF part of the target already exceeded and the project supporting a rolling population of more than 11,000 cadets at any one time, significant benefits are already being realised.

It’s immensely rewarding for Bob and his colleagues in the other Services, who have doubled the number of schools involved over the last eight years; largely funded by ‘reinvesting’ money taken from fines levied on the banks after the LIBOR scandal. He said: “Doubling the number of schools with cadet units in eight years is quote something significant. The units are open to boys and girls from the Year 8 – but, as the government requested, we have targeted schools outside the traditional area for cadet forces, the independents and grammar schools.

“The units we have set up are mainly in areas of social deprivation; where high numbers of pupils are on free school meals, for example. These are the schools of pupils whose parents might be earning minimum wage, if they’re employed at all, and so don’t have the wherewithal to pay for their sons and daughters to be involved as once might have been the case. And it’s working. Absenteeism is dropping, discipline is improved, and the cadets engage more effectively with their academic work.”

Bob’s role in setting up new cadet units has been to visit schools and explain the problems that must be faced and the benefits that will be achieved, and interviewing staff to become volunteers. “It is a burden for a school, so the Head has to convince me the school really wants to have a unit, which is going to mean extra work for staff, because they’ll be the volunteers who run it with help from RAF permanent staff. It’s like setting up a new department.”

Bob also works on the RAF Air Cadet Leadership Course, which runs for four weeks every summer.  It involves 66 (16- and 17-year old) cadets on each of 4 weeks, building on what they’ve learned in the cadet units and equipping them with the skills to secure Level 3 Certificates in teamwork from the Institute of Leadership Management – a qualification you’d normally expect an adult to apply for, not a 16-year-old.

“But we are building skills for life,” said Bob. “Through the cadet units these young people learn oral communication, a willingness to talk to someone they have not met, teamwork, problem solving, social awareness, and a spirit of adventure. These are the things people look for in potential employees, and once learned, are skills for life. To see the development of the youngsters in a week on our leadership course is just fantastic and humbling. You might say we’re making good young men and women better.”

Bob’s life in the RAF

Bob was an officer in the RAF Regiment for 33 years, before which he’d been a cadet in school squadron, a civilian instructor and officer volunteer before joining the RAF in 1973. Having retired from RAF Cranwell in 2006 he was asked to apply for a post firstly looking after events for the whole Air Cadet Organisation and then running the RAF part of the Combined Cadet Force. “I did that until October 2016 before retiring for a second time, and then in January 2017 was asked to look after the RAF Cadet Expansion Programme, which I’ve been doing part time ever since,” he said.

Suited but not booted

Although the RAF provides uniforms for its cadets, it doesn’t provide footwear. Bob is currently working on completing uniforms by appealing for Masonic donations to cover the cost of appropriate boots, and hopes to talk to Provinces nationwide to explain the position and get their lodges, and neighbouring businesses, to help meet the need. “A pair of boot seems a small price to pay as a contribution to the lifetime of benefit that can be achieved,” he said.  In addition, small donations to support the cadets from financially challenged families to attend meaningful training activities and camps can be life changing for them.