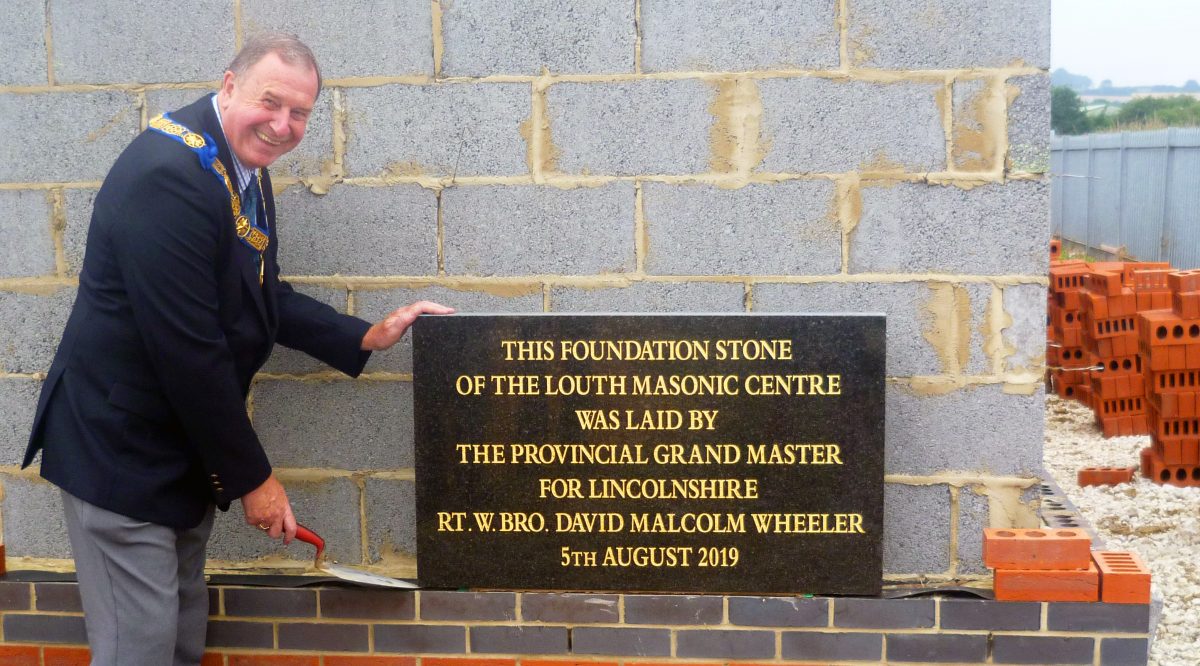 Louth’s new Masonic Hall has come a step closer with the laying of a commemorative foundation stone by PGM Dave Wheeler – and the opening up of another opportunity to make your mark on the building for generations to come.

To help in fundraising a Founders Brick Wall will be created in the building’s bar, with brethren being invited to buy a space and add their names. Details of how to get involved are available from fund Secretary Ian Castledine at ian@ian-castledine.co.uk.

The next stage in the building’s history will be the addition of roof trusses, which is expected during September, writing the next chapter of a story which began in 2010. Ian said: “We first looked into moving premises in 2010 when it looked as though we might lose our car parking facilities in Queen Street due to re-development in the town.

“We looked at several buildings around the town, but could find nothing suitable. Then, due to the ongoing costs of keeping the building in a good state of repair and seeing what the Skegness brethren had achieved we decided to look again.”

Early in 2017 a questionnaire was sent to the Brethren of both of Louth’s Craft Lodges asking the question: ‘should we stay or should we go?’ The majority was in favour of going, if new premises could be built.

“We found the current building site in Bolingbroke Road on the Fairfield Industrial Estate, and the owner allowed us to buy it when we had sold existing site and received planning permission. Our old premises went on the market in 2017 and permission was granted last September,” added Ian.

Contracts on the old building were exchanged at the end of November, and brethren moved out. Homelessness hasn’t been too much of an issue; everything except the Lodges’ warrants are in storage at Bro.Andrew Wrisdale’s warehouse, and meetings have been taking place at principally at Alford and Skegness Centre, but also Grimsby and Cleethorpes.

“After some unforeseen delays contracts were exchanged on the new site on 20th February this year, with building due to start on 8th April. In the event, a start wasn’t made until the second week in May, but the building is really taking shape now.”

Here’s how to get your name on a Founder’s Brick:

How to get yourt name on a Founders Brick