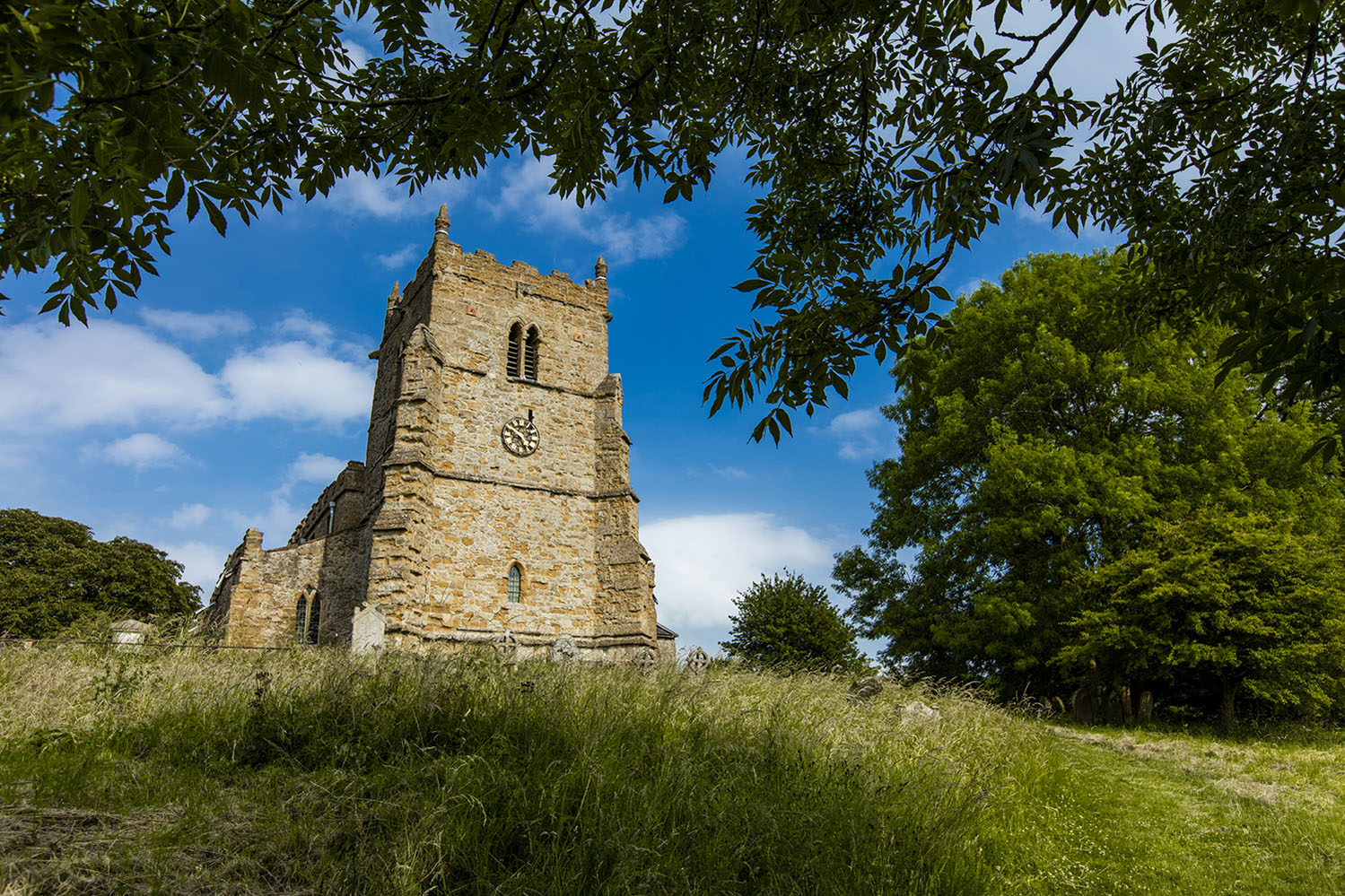 Jamie Evans explores the chain of history that links Bayons Lodge to the Ramblers’ Church in Walesby, a real merchant of Venice, a pot of treasure, and the Royal Family…

The Rev Percival Laurence was initiated into Bayons Lodge on Monday 10th March 1884, a month after his son had become a member, and five years after both had come to Lincolnshire for the Rev Percival to become vicar at the village of Walesby.

Although son Franklin Arthur steps out of the story almost as soon as he steps into it – excluded for non-payment of his subs in 1891 – his father was made of sterner stuff, went into the chair only four years after his initiation, and became Provincial Chaplain in 1890.

The church the Rev Percival had come to take charge of still stands; it’s the Ramblers’ Church, which stands on a hill overlooking the village, but in those days better known as All Saints.

The Rev Laurence soon found out that few of his parishioners were prepared to make the trek up the hill to attend his services, and set about finding a suitable alternative in the village that would make the trip to church less taxing.

His solution was to create a ‘temporary’ structure built of corrugated iron sheeting, which was a relatively new material at the time. ‘Temporary’ was to become ‘near permanent’, since the building was used for all the parish services for 30 years, with All Saints being used only for weddings, funerals and baptisms.

The Rev Laurence spent 34 years as the Vicar of the village of Walesby, all the while encouraging the local residents and his parishioners to give generously towards a building fund, so that they could one day build a new church in the village, at the bottom of the hill, so that everyone could attend a ‘proper’ church without having to climb the dreaded hill.

His dream was realised in 1913, when, with sufficient funds behind him, the Rev Laurence was granted to build St Mary’s Church in the village, and crowds gathered to watch workmen cut the first sods of earth for the building on June 6th that year – but shortly afterwards he collapsed and died, aged 84. The villagers thought a life-sized statue of their beloved Vicar would be a useful edition to the village, and asked Bayons Lodge for a contribution. The Lodge members suggested asking the Bishop of Lincoln for money, and made no contribution…

But here the story takes an interesting twist. In his will, the Rev Laurence had left £25,824, more than £3 million pounds at today’s values, so he could have comfortably funded the new church himself. But where had the money come from? He’d been a country vicar for 30 years, had never owned property and always lived in a Vicarage ‘tied’ to his job, with no other obvious sources of income.

Most of the money wasn’t in cash, but was held in shares in the Great Western Railway Company. It transpires that the Rev Laurence wasn’t a quintessential English gentleman, but came from a family called Levy. His father Joseph had been born in 1791 in London, and his grandfather Zaccaria had been born in 1751 in Venice, into a large family originally from Baghdad.

The family story goes The Rev Laurence’s great grandfather Elazar was in the scrap metal business in Baghdad, and had ‘discovered’ a heavy metal jar containing a large quantity of jewels.

The circumstances of the ‘discovery’ aren’t clear, but the brothers and their families quickly left Baghdad for Venice, where they set themselves up as merchants, and became extremely wealthy through their trading skills.

In due course, Zaccaria joined the family business, and became a successful merchant in Venice in his own right – until something went wrong with a business deal, and he was driven out of the Italian city with his family. They took refuge in London, where he was able to get a line of credit from the Bank of England, where he was obliged to leave as collateral a large chest full of valuables.

With this line of credit Zaccaria was in a position to start trading in the London Stock Exchange and to get involved in the Lloyds insurance business and he also operated his own ships bringing goods into the Port of London.

Joseph, the father of the Rev Percival Laurance, in due course also joined the family business and took over from his father, going on to further success as a stockbroker and in shipping, all the time supported by the Bank of England.

Come the 1820s and the end of the Napoleonic wars, there was an economic downturn, leading to the bank deciding to cut off his line of credit.

To protect their assests, they seized all his cash and property held by the bank, until he could repay what they claimed he owed them, thus putting Joseph and his business in a very difficult position. Still managing to trade, he instructed lawyers to recover from the Bank of England his money and the treasure chest deposited by his father.  He lost. He appealed. He lost again. The family is said to have been trying to recover the funds ever since, with the latest attempt as recently as 2009. And well they might; the funds could now be worth £400m, with compound interest.

It seems money’s behind that too. Joseph was happy to change his name to Laurence at the request of his new mother-in-law, acquired when he married Penelope Jackson. Her wealthy widow mother wasn’t keen on her daughter’s marriage to a Jew, and offered to make the couple her sole heirs on her death if he changed his name. Joseph agreed…

Going into the church

Percival is said to have been keen to enter the Church, having converted to Christianity, after visiting an aunt and her clergyman husband.

Meanwhile, his father, from a merchant family, continued to trade on the Stock Market in London. This was during the great railway boom, which was a real ‘money spinner’ for all investors and stockbrokers. Investors could not get enough money to invest in the new railway stocks and shares, and Joseph was heavy involved in trading railway company shares. When he died in 1878, he left over £140,000– more than £30m in today’s money, much of which was held in railway  company shares.

His Will made provision for all his surviving children, and it is believed that this Will was the source of the Rev Percival Laurence’s GWR shares.

The G.W.R. shares in the Rev Laurence’s 1913 Will were left to his eldest son, also named Percival Laurence, who was born in 1854, he followed his father’s footsteps and attended Christ Church College, Cambridge, where he studied Law and he became a barrister in London. An asthma sufferer, he was advised to live in a warm dry climate, and chose South Africa. There he rose to became a Judge, at the end of the Boer War was appointed as the senior judge of the Court of Reparations, dealing with all the claims for compensation and loss due to the war. He must have done a good job because by 1906 the majority of these claims had been amicably settled. For his work he was awarded a knighthood. He rose to become the chief Judge of the Supreme Court of South Africa, returning to the UK after WW1.  He died in 1930, in his will he left £275,000 and he made a large bequest to his old College in Cambridge, which still provides for several Professorships.

From another branch of the family which grew up in Walesby Guy Stewart Laurence chose a career in the Royal Navy and rose to the rank of Commander. His son Timothy James Hamilton Laurence, and although he’s the great grandson of the Rev Percival Laurence, he is better known as Vice Admiral Sir Tim Laurence, the Princess Royal.

So from Bayons Lodge in the sleepy town of Market Rasen, we can trace a descendant of a Past Master of the lodge all the way to Buckingham Palace.

On 6th June 2013, Vice Admiral Timothy Laurence was the guest of honour at St Mary’s Church in Walesby, where a service was held to mark the death of his great grandfather, the Rev Percival Laurence 100 years before. Also present were members of the family of Bro Franklin Arthur Laurence, who had ben initiated into the Lodge the month before his clergyman father, who had travelled all the way from their farm in Lincoln, Nebraska for the ceremony.

It had been Vice Admiral Laurence’s first visit to Walesby, but he was had been delighted to visited, as his father had told him of the many happy times he had whilst staying at the Vicarage with his grandparents, before going off to boarding school.

• Taken from the much longer text of a presentation made by Jamie Evans.