Lincolnshire Freemason gets onto the BBC 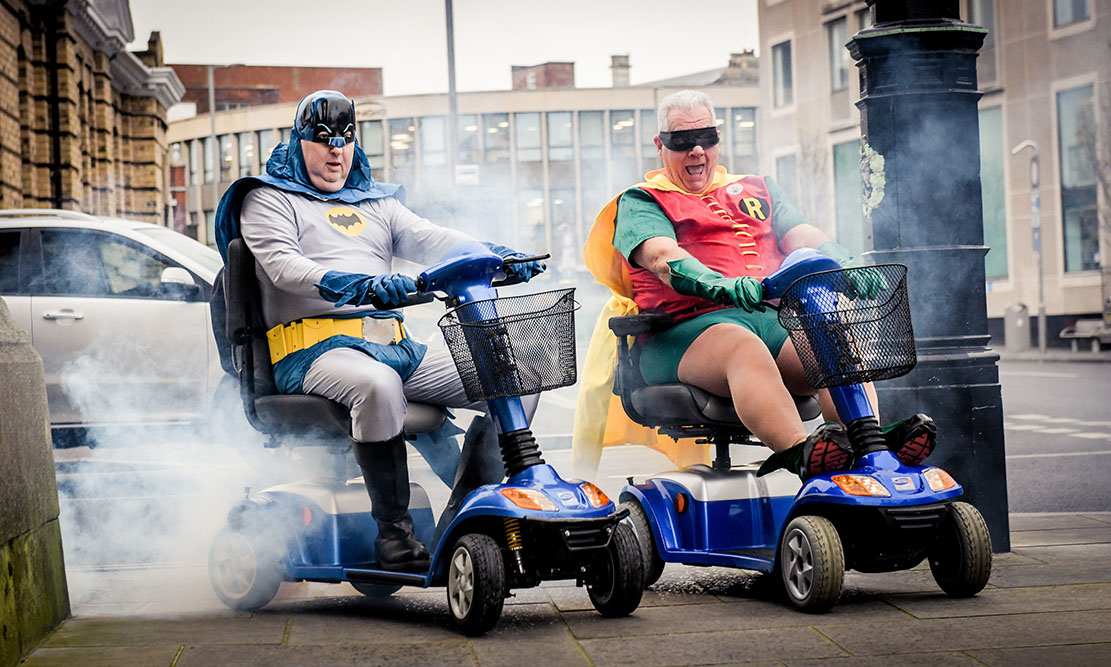 Terminally-ill Greg Stratford isn’t letting his medical problems get in the way of raising money for St Andrew’s Hospice in Grimsby.

The latest adventure he’s got involved with roped in not only his brother-in-law Alan Rowson again but also North Lincolnshire Mayor Coun Terry Walker to be part of a re-enactment of the iconic Fools and Horses Batman and Robin episode featuring Sir David Jason and Nick Lyndhurst. Greg tells the story…

“The girls at the butchers (affectionately known as the Birkett Babes) learned that Alan and I had been to the panto in Hull dressed as elves, and asked if I would pop in dressed as the elf. That’s were the Days of Madness started, as my daughter suggested I should do it and try and raise few pounds for charity so that’s what we did. I spent all day dressed as the elf raising funds for St Andrew’s Hospice in Grimsby.

“St Andrew’s continued to monitor my condition and found that a cancer in my eye had moved to my liver, and I went on a drugs trial. During that my eye got worse and had to be removed, which is where that year’s Day of Madness came from – the theme had to be Pirates.

“Then I had chemotherapy – using drugs also used to treat ovarian cancer, so our theme the following year was to be The Two Ugly Sisters. My sister created two incredible panto costumes, the treatment stopped, and the fund raising went ahead.

“At the end of 2018 I was informed that my prognosis was not perfect, so to speak, and, after aother round of chemo, I was told nothing else could be done for me. My wife was against the Days of Madness antics, but I insisted I wanted to continue our fundraising, and we decided we would be Batman and Robin this year.

“I had this crazy idea. I asked if the Mayor was prepared to be in a re-enactment of the scene, and he said yes. Off we went to create a parody we called ‘Only Two Fools and No Horses’.

“This year we raised almost £9,500, and since December 2016 to date we will have raised more than £15,000, capped off by an incredible night at the town hall with a capacity of 170 guests, when we ended with a standing ovation. I think the alcohol may have taken over by then…”

Stewart Oxborough, Secretary of Lord Worsley Lodge and Scribe E of Lord Worsley Chapter, both of which Greg is a member of, said: “Greg’s spark also ignites us all. His determination and amazing bursts of energy to do these acts is really phenomenal. They take their toll on him physically afterwards, but he is always thinking of others and what else he can do.

“We are amazed that despite the terminal diagnosis and resulting loss of his eye, massive bouts of chemo and radiotherapy he has not only lasted this long but manages to accomplish so much fundraising too. ‘Awe’ is a word often used in the modern idiom, but we are held in nothing less than total awe for our Brother and Companion in Lord Worsley Lodge and Chapter…”

• To support Greg and Alan’s fundraiser, visit their JustGiving page. Search for Greg Stratford at www.JustGiving.com
• See the video on line at this link.