Lincolnshire rolls out the red carpet for trio of Leicestershire cyclists 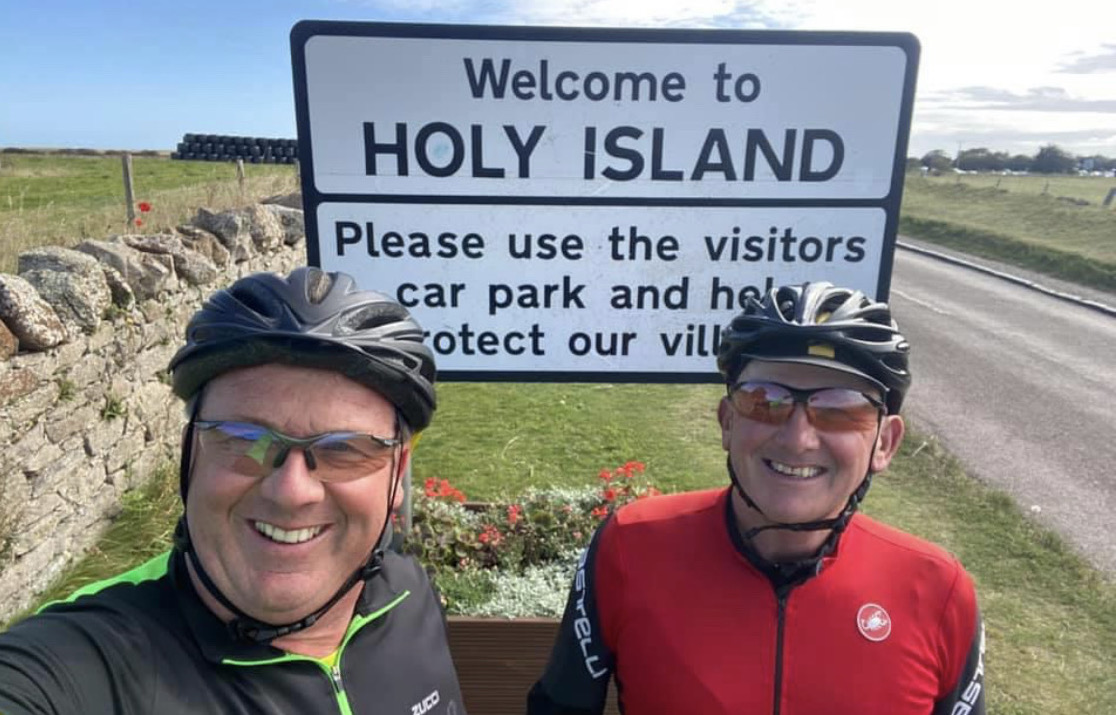 Although the ride home from Scunthorpe railway station took Phil and Rob Aitken past the 300-mile mark for their week-long coast to coast cycling epic – one of the longest they’ve ever done – Phil hasn’t yet achieved his ambition of raising £2,750 for the Freemasons’ charity the MCF as part of the #Lincs 2025 Festival.

Day 6 was the last full day in the saddle, and saw them ride from Duns to Berwick in the Scottish orders, with a detour to Holy Island en route. It was the end of what had been planned as a London to Paris ride; a plan ditched when Covid restrictions got in the way.

There is still time to make a donation at Phil’s Everyday Hero page here.

In the end they rode from Morecambe to Berwick via Edinburgh Holy Island on the north-east coast, accomplishing the planned distance without having to leave the UK. Phil takes up the Day 6 story here:

“Woke up at daft o’clock after a pretty average night’s sleep on the squeakiest bed ever! That said, enough sleep was had so it was down for a really nice breakfast and then on our way! Decided to visit the old haunts from our childhood on our way out such as Earlsmeadow, Duns Park etc, then onto the route to Holy Island. On paper, it’s all downhill (I said to myself), which turned out to be a load of nonsense as it was lots of rolling hills, and we ended up with nearly 2,000ft of elevation!

“Eventually arrived on the causeway and our ride onto Holy Island and we found it was really busy, so it was a mooch around the church of St Aiden, a wander around the streets and a photo of the Castle before lunch at the Ship Inn. After that, and to be sure we beat the tide, we started to leave but Rob got accosted by an islander for leaning our bikes on the side of her house! I biked off.

“The ride back was fab, pretty scary at times on ‘off road’ sections, though there were really lovely views to be had! Rob then had another puncture, though today’s was in glorious hot sunshine so it didn’t seem so bad. All done and back on the off road route into Berwick, and eventually over the new bridge and into the town centre and the Youth Hostel. Unfortunately it was shut, so we parked the bikes and wandered into town for a beer and to contemplate our adventures over the last six days. When we eventually into the YHA the room was OK. We showered and had a ‘ninny nap’ before wandering to the Magna Tandoori for a couple of Cobras and a fab Indian meal, which was amazing.

“We’d ridden 297 miles in six days, so the ride to Berwick station (uphill by the way) and then from Scunny Station to home saw the 300 miles achieved. The link to our donation page is already in this post but here it is again, just in case… https://e0151.everydayhero.com/uk/the-london-to-paris-challenge Thank you in advance.