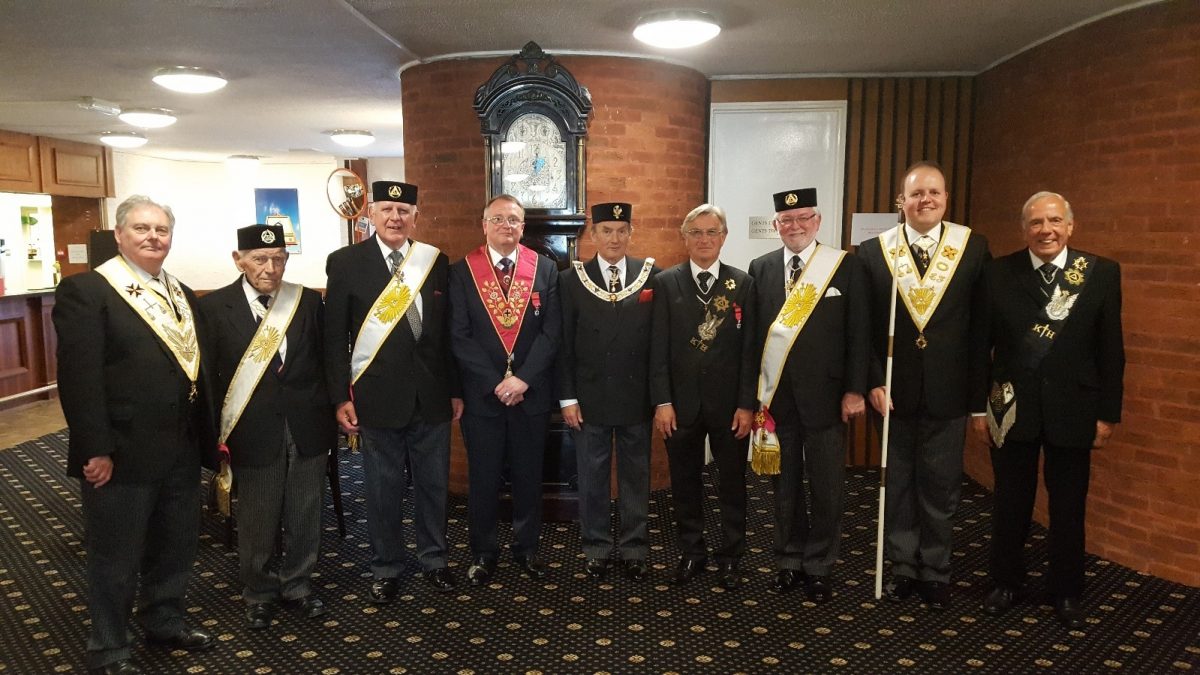 Tower Chapter Rose Croix No 192 celebrated 100 years of The Order of the Ancient and Accepted Rite in Grimsby at the Enthronement Meeting held on 27th June 2018 at the Masonic Hall, Cambridge Road, Grimsby.
After Excellent and Perfect Brother Lindsay Studd had been Enthroned as Most Wise Sovereign by Ill⸫Bro. Steven Dickson 30°,  the Centenary Warrant was presented by Most Illustrious Brother The Right Honourable the Lord Wigram MVO 33°, Grand Chamberlain, who was accompanied by Ill⸫Bro. Christopher Noon 31°, Assistant Grand Director of Ceremonies.
A large number of brethren attended the meeting, nearly all of whom dined afterwards, enjoying a splendid meal.  Among those present were the Very Illustrious Brother Trevor Clingan 33°, Inspector General for the District of Lincolnshire, V⸫Ill⸫Bro. John Boyington CBE 33°, Inspector General for the District of Yorkshire West Riding, Ill⸫Bro. Graham Ives 31°, Right Worshipful Provincial Grand Master, Most Excellent Grand Superintendent and a Member of the Chapter, together with two Past Provincial Grand Masters and the Provincial Grand Master Designate. They were joined by many other visitors, including  executive members of several other Orders,  members of  other Lincolnshire District Chapters and distinguished guests from other Districts.
A fascinating history of the Chapter was delivered by E⸫&P⸫Bro. Adrian Joyce, during which he mentioned that there were two explanations for the origin of the Chapter’s name in the Consecration minutes, which had been read earlier by Ill⸫Bro. David Gentle 30°.  The first and most obvious being the strong relationship of the Founder Members with Grimsby Docks and the Dock Tower.  The second explanation is in respect to the Very Illustrious Grand Secretary General, John Charles Fitzroy-Tower, and it is recorded that as his name had not previously been adopted as a Chapter name he willingly gave his permission for the use.
E⸫&P⸫Bro. Joyce went on to say that the Consecration was held on 12th June 1918 at the Masonic Hall, Osbourne Street, Grimsby, and the Chapter continued to meet there until moving to the current home at the Masonic Hall, Cambridge Road, Grimsby in 1971.  The Founder Members included The Right Honourable the 4th Earl of Yarborough, the Provincial Grand Master for Lincolnshire, who had close links with V⸫Ill⸫Bro. Fitzroy-Tower.  The other Founders were Ill⸫Bro. Isaac Newton Woodwiss, and E⸫&P⸫Bro. Walter Shephard, Frank Barrett, Leslie Kingsford Osmond and George William Goulding.  Many prominent local Freemasons also became Members of Tower Chapter, contributing to the quality and strength of the Chapter.
At his speech at the festive board, the Grand Chamberlain said how impressed he was with the Chapter and offered congratulations and best wishes for success in the future.
The many comments received after the Meeting confirmed that it had been a very happy and memorable occasion, a fitting tribute to the hard work and enthusiasm of the Founders of the Chapter and all those brethren who had subsequently ensured its continued prosperity and success since the consecration 100 years ago.
Ill⸫Bro. David Orrey 30°, Recorder