My old back shoes are looking glum… 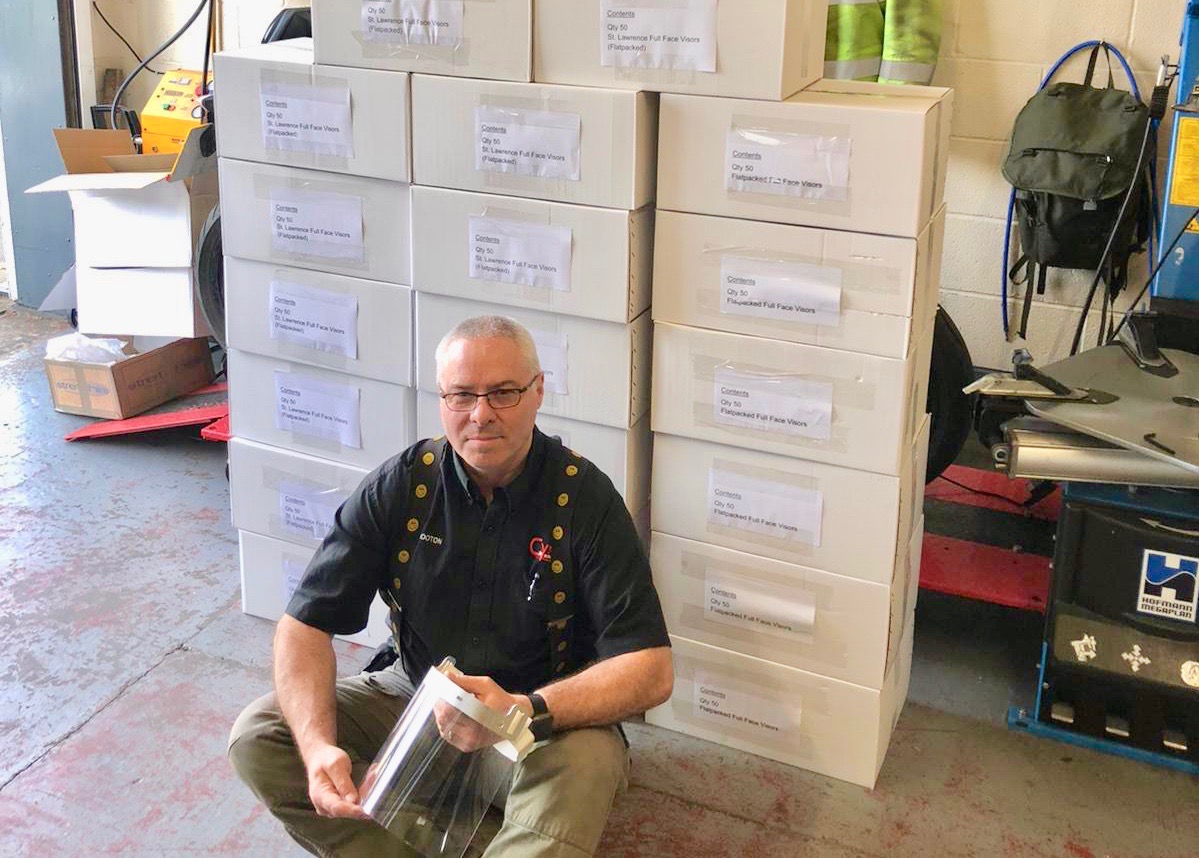 Mark Hooton with the finished and packed visor order for the RMBI.

The work was done at the premises of Cymarc Engineering, which normally makes components for the rail sector and the motorbike industry.

Company owner Mark Hooton said: “From nothing to 1,000 St Lawrence visors manufactured, assembled and packed in just two days. I’ve been overwhelmed by the help of volunteers who’ve stepped up to help make this possible. Without them this would not have happened.

“I’d like to acknowledge the help of my Lodge friends Liam Dexter and Phil Allen as these guys didn’t hesitate to get stuck in, and their commitment and help has proved invaluable – I am deeply indebted to them. They’ve been heroes, working with members of other Scunthorpe lodges.”

Mark switched his highly-specialised industrial laser cutting equipment to producing aluminium frames for his own design of visor in a move prompted by a cry for help from the RMBI, which was looking for visors for staff in its care homes.

The initial request was for 3D-printed models, but Mark’s equipment, designed for rapid prototyping, wasn’t up to the task, being capable of just four masks in 16 hours.

“Then I spoke to a friend, and he suggested that my two industrial laser cutting machines could be used to make aluminium frames rather than plastic ones. I came up with a design, and a prototype was well received by potential users.”

Within 24 hours Mark had created a prototype, and was supported by other members of his lodge and his staff in gearing up to produce hundreds every day, including sourcing raw materials, establishing logistics channels, setting a production line, and defining the product in a document allowing front line NHS and care sector organisations to understand where and how it could be used.

Mark said: “We have completed our first order for the RMBI, and no doubt other companies in the care home sector will be interested too.

“I’m astounded by the wonderful support that’s been forthcoming from my Freemason friends in the relatively short time since our lightbulb moment. Professional people have come to me and offered support and advice, and without them we couldn’t have come so far so quickly.

“I’m also astounded by the response there has already been to our GoFundMe campaign to raise money to buy raw materials. The generosity of people I don’t know is humbling, but I guess that, like me, they just want to do something to help us through this crisis.” Click here to go to Mark’s GoFundMe page.