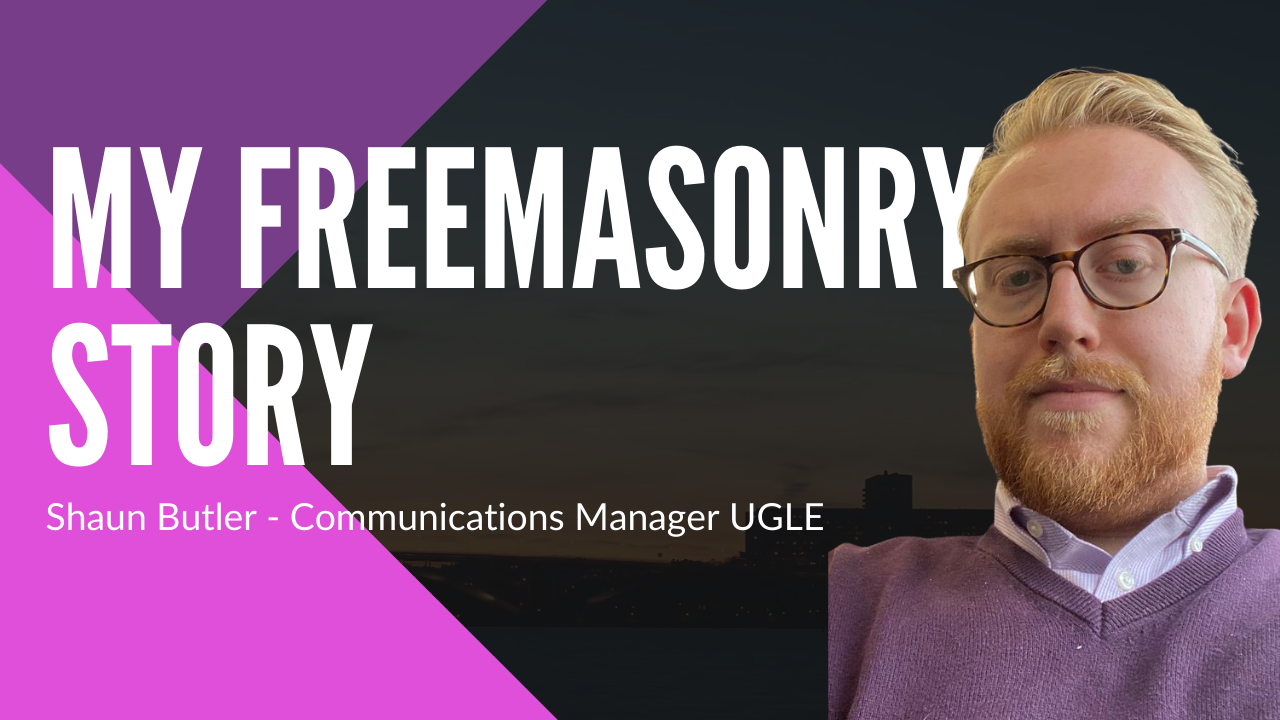 After almost 80 years, Freemasonry is emerging tentatively from the shadows into which it slipped as a result of the persecution felt by members during the tyranny, brutal reprisals, and destruction of the Second World War.

As part of that shift Lincolnshire is introducing a new communications thread made possible by changing attitudes and available technology. Called My Freemasonry Story, it will feature a series of video interviews with the people who together form its future; the younger people who’ve perhaps joined relatively recently. A common theme runs through the interviews; these are all people who have embraced the positives offered by Freemasonry, and who are contributing to its enhanced profile by their own actions. We’ll share all of them on our web site with regular updates.

To kick off the series we’ve looked outside Lincolnshire, and have invited Shaun Butler, the Communications Manager at UGLE, to be our first interview candidate.

Shaun’s view is that although fears of reprisal against Freemasons were very real during wartime, a change in perceptions is now long overdue. He says: “Before WW2 we were very public, and it was strange not to see Freemasons marching in a parade and wearing regalia in the street. With World War 2 and the Nazis in the Channel Islands on brink of invading the mainland we just shrunk underground – perfectly understandable, seeing what Hitler did to Freemasons in concentration camps. That was entirely understandable at the time, but we’ve yet to reappear fully from that.”

The result, he says, has been the creation of a void that’s been filled with misconceptions and lies. “They paint us in a bad way, and what we are trying to do now is undo that by getting out there and shouting from the rooftops about the good we are doing.”

Shaun says to deal with the nastiness and misconceptions that often await us is to meet them head on, and stand our ground. “That was kick-started by David Staples with the Enough is Enough campaign, which was very much a turning point, when we said ‘we’re not going to sit back and let you thrown dirt at us any more’.”

He advocates talking more about membership, about fantastic things we do. “That’s something we’ve vastly improved on since when Michelle Worvell joined us as Director of Communications. We’re encouraging people to share more about what they’re doing in their communities. What’s happened around Covid-19 is a great example of that. It’s demonstrated the powerful role Freemasons have in their communities. Look at Matt Felgate and the Lincoln Gin distillery, or Mark Hooton and his motorbike parts business. Both switched their means of production to producing things for the benefit of the community. I wish that Freemasons would shout about a bit more about things like that they’re doing.

“If we can go through these misconceptions one by one, I’m really confident we can turn it around. At Open House London last year we were able to prove that women can be Freemasons by having the Grand Master of Freemasonry for Women, in her regalia, talking to our visitors.

“This video initiative and your website video channel is massive step towards achieving ‘normalisation’ of what we do. The fact that you can interview your Provincial Grand Master so he can share his views with members is fantastic, and example of how to use new platforms that didn’t exist before. Who’d heard of Zoom before all this?”

• Listen to Shaun’s full interview at the link below.

• Is your Freemasonry Story an interesting one that you’d like to share in our series? If so, please contact Chris Watkin (who had the idea in the first place, and is doing the interviews) at christopher@christopherwatkin.co.uk or Provincial Communications Officer Stuart Pearcey at stuart@wordsman.co.uk