Jim gets his head down for speed record attempt

Jim Brown says he has no excuse not to get up to speed with his land speed record bike in time for Masons&Motors, our exhibition of classic and interesting vehicles at Doddington Hall on July 24th.

The Gainas Lodge member from Saxilby is bidding to set a new UK record for 175cc motorbikes, pushing up to 126mph with his nose two inches from the front wheel, and his chest just eight above the ground.

The bike will be a strange bedfellow amongst the other more ‘usual’ though still rare classic cars and vans still well worth a look. Turn up with your own on the day to be part of the display, which will also feature a flypast by the Battle of Britain Memorial Flight – weather and RAF technical issues permitting.

Jim is staging his record attempt as part of his Lincolnshire Rocketsuit Project, a uniquely ‘county venture’, since he wants all elements of it to originate in Lincolnshire, from the designs to the materials used. He’s already been involved in a few land speed projects over almost 20 years: a World land speed record steamcar, a couple of 400mph bikes, his own 175cc UK record bike and petrol and electric monowheels with Guinness World Records.

Jim says: “The current UK 175cc record is 118mph, but I hope to raise that to 126mph to equal a famous speed record set in July 1938 near Grantham – admittedly the Mallard steam Locomotive was a larger class of vehicle, but nevertheless it was set in Lincolnshire and still stands! 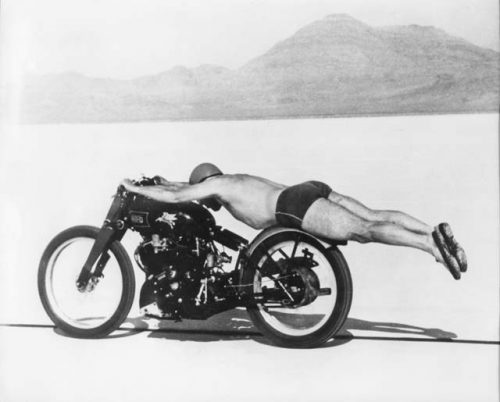 Rollie Free went for a motorcycle speed record in his swimming trunks, prone on his bike at the Bonnevile Salt Flats to make it more aerodynamic. Jim’s bike gets him even more prone…

“I started this design with a blank sheet of paper. In the picture above Jim’s seen aboard the prone bike built by Will Formosa, who took the picture and will be aiming for 300+ mph on it thanks to a turbocharged 1300cc engine and a huge rear tyre. Says Jim: “Will saw my bike and realised the speed benefits of a prone riding position, so I guess you could say I inspired the design…”

The design differs considerably from a normal motorcycle in order to reduce the frontal area. A 50cc prototype was built and tested in 2013 at Ginetta’s track in Blyton near Gainsborough with the help of Ivan Milnes from the Sir Isaac Newton Lodge in Grantham.

“The next bike, a 125, was made to test a new front end layout and reached 70mph in May 2016 with an untuned scooter engine. That may not seem fast, but it’s a different story when your face is eight inches off the floor and two inches from the front tyre.

“The 125cc frame is currently being modified to fit a 175cc engine with three times the power to attempt the record next year. Once the engine is in, bodywork needs to be made. It’ll resemble a canoe when it’s finished, although sharp-eyed bystanders may notice a small air intake at the front bearing more than a passing resemblance to a square & compasses!”

Masons&Motors is being organised by Dave Gibson from St Lawrence Lodge in Scunthorpe, who encourages anyone with an interesting vehicle to bring it along. He said: “Last year’s event attracted about 60 cars of all kinds, and we have high hopes that this year’s event will be even more popular. There’s no need to make a formal booking; just turn up from noon on the day with your interesting vehicle, and volunteers from the Stewards Lodge will show you where to go. We already have promises of some really unusual vehicles – but visitors in ‘ordinary’ cars are just as welcome; Doddington Hall is in a wonderful country house setting with lots of dining options, or you can bring a picnic to enjoy outdoors.”

More information about Jim’s project is on Facebook at www.facebook.com/rocketsuit and he’ll be giving a talk to the Free Wheelers Lodge at Louth on May 14th.