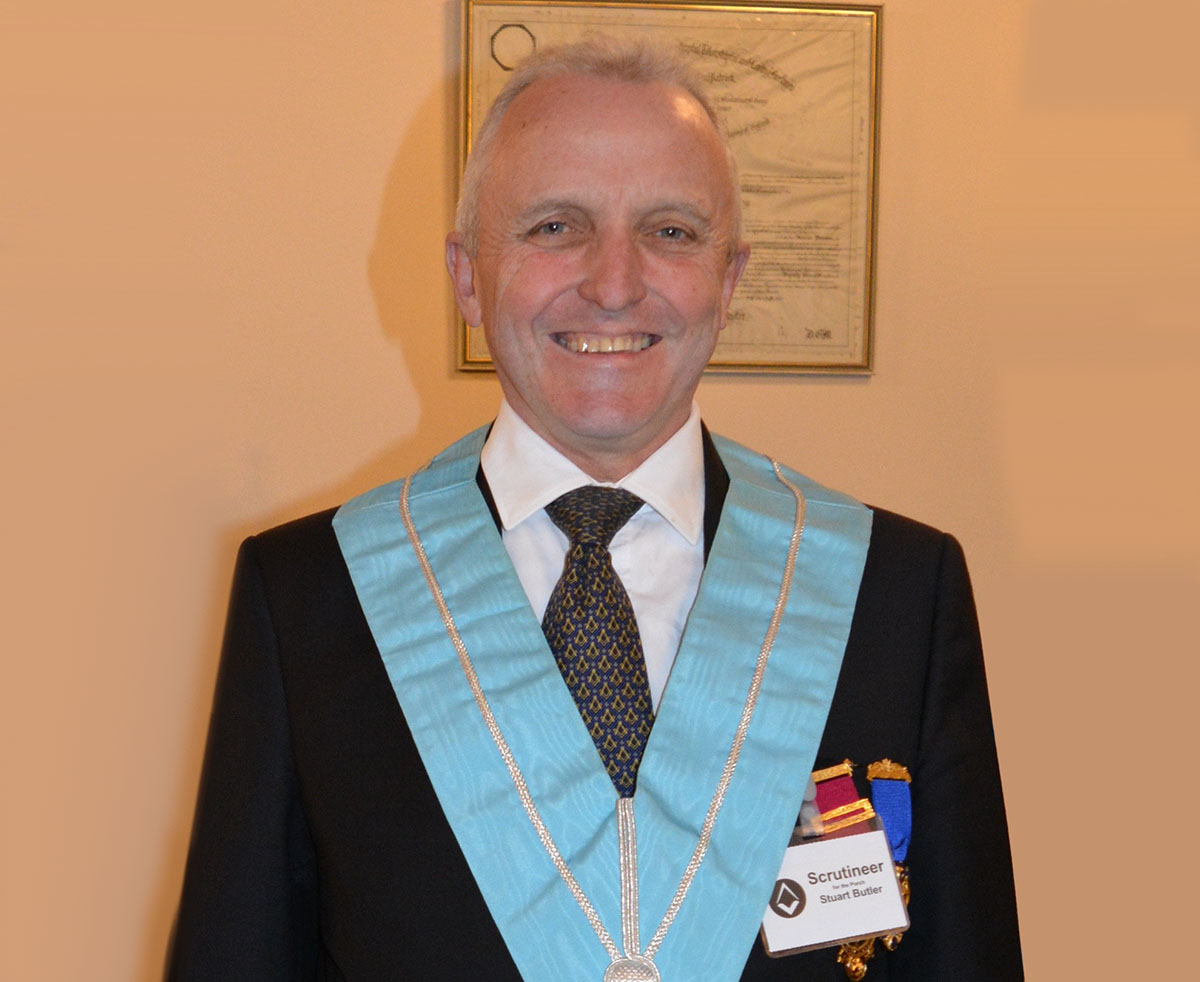 Regular attendance at Grand Lodge Quarterly Communication meetings and a chance encounter on a train have opened up a new role for Lincolnshire Freemason Stuart Butler.

What is a scrutineer, and what does the role entail?  As a scrutineer I’m responsible for making sure brethren are on the list, and therefore eligible to attend the meetings; that they sign in; and that they are dressed appropriately, including wearing the correct tie and jewels as per the summons.

How did you find out there was a Scrutineer vacancy? I met a Freemason on the train going to a Grand Lodge Quarterly Communication, and after we’d chatted for a while he said he was a senior Scrutineer, and that there was a position available. From everything we’d chatted about he thought I’d be an ideal person to apply, especially as I attend all the meetings anyway.

And what was the process you had to go through to eventually fill the position? After deciding it’s something I’d like to do I applied, I then had to go for an interview to make sure I was suitable for the role and to find out more and make sure it was right for me. Thankfully my application was successful, and I was invited to do trial period for three meetings, starting in March this year.

Talk me through your first day as a Scrutineer. I got to Grand Lodge earlier than usual and put on my regalia, which is my normal lodge regalia with the addition of a Scrutineer badge. I was then given my list, which each Scrutineer has, and consists of the name and lodge of each person attending within a range. For example, my list might be all brethren from lodges numbered 6000-6400. I then sat at my table and the brethren came to me to be signed in and checked over. On this occasion I had an experienced Scrutineer watching over me as it was my first time. When everyone was signed in I took my seat in the Grand Temple as usual – except this time I had a reserved seat.

Did you have to put anyone right about their clothing etc.? Thankfully not on this occasion

Did you enjoy your first day as a Scrutineer? Absolutely. It was great to be going to Grand Lodge as usual but to be doing something a bit different, and talking to lots of people who were excited about being at Grand Lodge for the first time.

Are you the first Scrutineer at Grand Lodge who’s not a London Freemason? I am not sure if I am the first, but I am the only one at the moment travelling quite so far to attend. Most of the Scrutineers are London Freemasons, with a handful from Buckinghamshire and Hertfordshire. I’m told that Grand Lodge is keen to get some interest from brethren in provinces a bit further afield, and it will be something that is going to be promoted in the future.

What would you say to brethren who may wish to become a Scrutineer? My main piece of advice is that you have to be committed to going to the meetings you can’t miss many of them which is why I was seen as a potential candidate as I already regularly attend. If you’ve never been to Grand Lodge but like the idea of scrutineering, go to a few meetings and see if you enjoy attending. I would be happy to answer any questions or give some advice if brethren would like to contact me regarding the role.

Can anyone attend Grand Lodge Quarterly Communication? Every brother at the rank of JW or above is automatically entitled to attend. Master Masons can attend in June, September, and December, but not in March, andmust book in beforehand.

Would you recommend it as a good day out? Most definitely, it’s a fantastic day for both junior brethren and longer-serving Freemasons. It’s a great chance to get together with members of your Province who you may not see very often and to meet people from other Provinces in the wonderful surroundings of The Grand Temple at Freemasons Hall, and if you choose to dine, The Connaught Rooms too. People travel from all over the country to attend Grand Lodge Quarterly Communication as they know it’s always going to be a special day.

Tell us about your Masonic career I was initiated into St Pega Lodge, in Deeping St James, in November 2007, and went into the chair in 2016.I’ve been attending QC meetings since I was a Junior Deacon, and I’ve missed only one meeting since then. I shall be appointed as a Steward on the Provincial team at the May meeting of Provincial Grand Lodge.

For any additional information W. Bro Butler can be contacted by email to stuartbutler2@aol.com