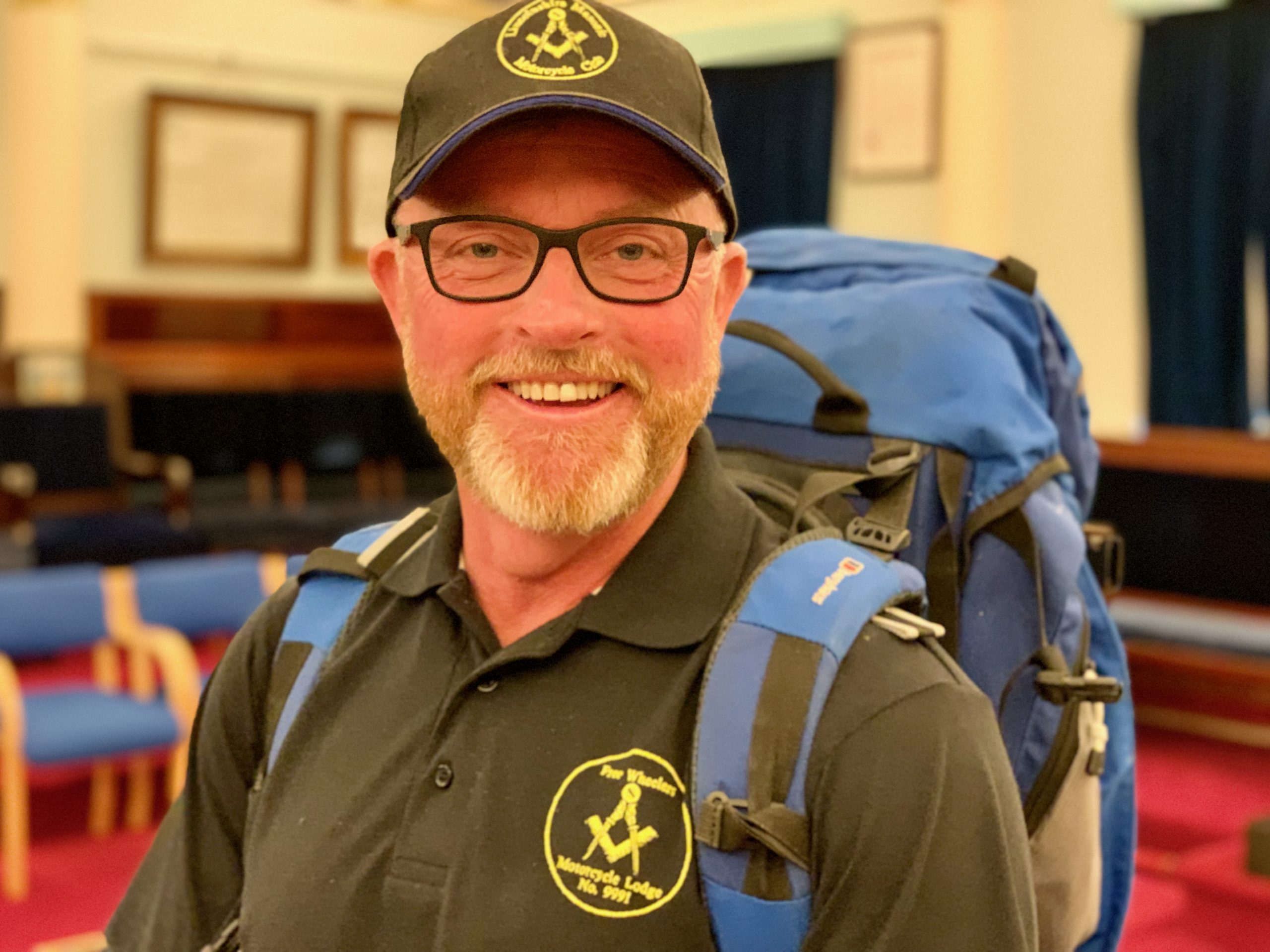 On New Year’s Day Chris Jones will set off on an 18-month challenge to walk the entire coastline of Great Britain.

The purpose of his 7,000-mile trek is to clear his mind of mental health issues and to raise money for the MCF, which he is convinced saved his life as he struggled through a mental health crisis. On his walk he wants to remain in sight or earshot of the sea. “So long as I can feel the sea breeze in my right ear, I’ll know I’m on the right track,” he says.

Long term he hopes he’ll to raise as much as £100,000 to give to the MCF through our Lincs2025 festival, with the money coming from donations on his route, or from sales of a book he hopes to write about his journey – both in his mind and on foot.

As part of his coastal trek, he intends to visit as many Masonic centres as possible – so long as they’re near the sea. He won’t be away for the entire journey – he’ll return home by train for short visits in March, May and October to see his family and for important events, such as installing his successor as Master of the Free Wheelers Motorcycle Lodge.

Why take on the challenge?
Said Chris: “I’m very open about my struggle with my mental health and this is the main focus of this challenge. I have suffered with poor mental health for about 10 years and the very lowest points have cost days and sometimes weeks of my life contemplating suicide and an escape from the misery.

“I’ve no idea why or exactly when it started, but back in 2020 I was at my very lowest and my wife Michelle eventually convinced me to seek help. I contacted the NHS and started a counselling programme, but it was hopeless. The Mental Health team was overworked and counselling sessions were often cancelled or moved at the last minute.

“I can’t remember why I was looking at the MCF website, but I noticed a link to a Mental Health Support programme. I called the number, and 35 minutes later I received a call back from a mental health specialist and we talked for over an hour.

“She set me up on a counselling programme and I don’t have any doubt that her persistence, understanding and thoroughness saved my life. The programme lasted for about six weeks and to this day I still use some of the techniques I learnt to try and help when I feel my mood changing and I sense the ‘big black dog’ appearing…

“I had no idea that the MCF even offered a support programme. How many other Freemasons are even aware that there is such a fantastic support programme open to them if they need it? I’m guessing very few.”

Why the coastal walk?
A few years ago Chris thought he might walk around the world, but said: “Michelle wasn’t impressed with this hairbrained idea so I rethought it and settled on the UK coastline, to start with. Having researched others that have done the same or similar challenge the daily distance will vary between 10-25 miles, depending on weather, terrain and stopping to visit Lodges and meeting Freemasons on the way.” He’ll do that carrying his home with him in a 20kg backpack.

“The plan is to use my tent for 80-90% of the trip to keep the cost down, but also to really embrace the outdoor experience through the seasons. Michelle will join me from time to time, so we will probably use B&Bs for those bits and in very built-up areas where I can’t pitch the tent I may have no choice but to use accommodation. I also expect that I will be offered a bed for the night by good-natured people, especially when the weather isn’t being kind!”

Chris has done minimal training. “I finished the Free Wheelers Lodge meeting in Lincoln on Saturday, rode home, had a shower and walked to my local pub for a few pints. It was 1.7 miles and it took me half an hour. I’ve chalked that up as my training and I now feel fully prepared… Seriously, I keep myself reasonably fit by swimming, walking and using the gym perhaps four times a week. Apart from a few short walks to check the fit of my kit, that’s it. I’m not sure one can train to walk 7,000 miles, so I feel I should save myself!”

The route and logistics
When he sets off from the Skegness Masonic Centre Chris will head north. “Many who have walked the coast do it clockwise, but as I’m leaving on New Year’s Day, I’m thinking I will be in Scotland through the summer and then heading down the west and south coast as next winter sets in,” he explained. He plans to shop on his journey and carry provisions to sustain himself.

“The longest I’m likely to be away from all habitation will be six or seven days in one go, so I can carry enough for that. This will be the biggest part of my planning as I get going to ensure I can replenish my food and gas for cooking.” He’ll plan his route daily, using maps on his phone or iPad. “Cliff faces and the changing tides will create problems so to ensure I don’t get trapped on a beach with nowhere to go when the tide is racing in, I will need to keep on top of this.

“Naturally, I will be checking in with ‘senior management’ on a daily basis. Michelle and my family will be tracking my progress and my oldest granddaughter Ava will be plotting my course in school with her classmates. She’s 9 and is going to use this trip as a live geography project. She will probably join me for bits of the walk with nanny, which will be a huge lift…

“I’ll be carrying a mobile phone to take pictures and an iPad to keep a diary and record the trip. I’m not heading out to Outer Mongolia so support will never be too far away…

Change of direction
In 1999, Chris created and ran an Independent School offering education to 13-16 years olds from all over Lincolnshire that had been excluded from mainstream education. He employed 30-40 staff, many of whom were ex-police officers, soldiers and airmen. They focused on vocational skills training and over the 19-20 years helped just under 5,000 young people from all over Lincolnshire to move into the working world, many of them able to achieve and contribute to society after a bad start and often after being let down by an education system not geared up to deal with young people that just didn’t fit.

“I was passionate about what I was doing, and genuinely thought my poor mental health was a consequence of the stress and pressure of dealing with relentless local and national government changes compounded by the ever-changing funding agenda. Anyway, we won a large local government contract which gave the company value so we decided we should sell as this would help to sort my head out.

“I know now that I should have focused on sorting out my mental health and not selling the one thing that could have actually helped me. Since selling the business in 2019, my mental health has probably been the worst it has ever been. Having no direction in my life, other than my family and Freemasonry, I reinstated my HGV licence so had a go at driving lorries again but that didn’t help. I dusted off my tools and went back into the Construction world but that isn’t working for me either so I’ve made a decision. Michelle retired to take care of our three grandchildren so they will need nanny, perhaps for another 10-12 years, we will retire, hopefully to life on a narrow boat travelling the canals and rivers of the UK if we are still fit and able enough…

“Until then I’m going to spend my time trying to learn as much as I can to beat the misery caused by poor mental health, for both myself and for others suffering the same plight. Walking, fresh air and the sea all help, so a nice gentle walk around the coast is a good place to start.

“I want to encourage others to join me for short sections of the walk, firstly to show off their part of our coastline and their Masonic Centres but more importantly, to talk to me about how they are beating their demons and controlling their mental health issues. This will be about them and their battles, not me and mine which I’m sure will have a mutual benefit.

“Every day I will write up the stories and by the end of the walk, hopefully, I will have enough content to write at least one book. Perhaps two; Masonic Lodges on the Coastline of our beautiful Kingdom and how walking, talking and listening can help to overcome struggles caused by our mental health.

“I also feel this is only the beginning, I have no plans for the next adventure but as I said, I have 10 to 12 years so whatever is next, it will have to be another physical and mental challenge and will have the same goals and objectives.”

How you can help
Chris will give all money he receives from his walk to the MCF via the #Lincs2025 Festival. Details of how you can contribute will be circulated in due course

You could buy his beloved BMW GSA motorcycle