And it’s a ‘yes’ from him! Ruth makes leap year marriage proposal at ladies’ night

Mike Haynes is using a new way to bring Freemasonry to life with the use of virtual reality technology.

The tech can take the VR headset wearer anywhere in the world without leaving their home ­– such as into Freemasons’ Hall. Mike takes up the story: “On social media I started seeing lots of 360-degree photos viewed by tilting your phone or moving your finger you get to see not just what’s in front of you but everything around it, up, down, to the side and even behind.

“I am very much into techy stuff but I don’t own an expensive 360-degree camera – but I found a phone app called Google Streetview. In it, guided by dots, you take a series of pictures of your surroundings. When you have captured everything it ‘stitches’ the pictures together and creates a 360 degree photo.

“This was great for sharing 360 photos of our lodge room on The Lodge of Aveland Facebook page so others could get a look around.
The real game changer came when I got a VR headset. I could pop my phone into it and open the picture , so the headset wearer is completely immersed in it. It’s as if they are in the lodge room with no boundaries; everywhere they look they see that part of the room as if they were actually in it.

“The idea to use this as a tool for learning ritual wasn’t immediate – but the answer had been staring me in the face all along! I’ve given it a go and found it very helpful. The latest 360-degree picture I have is the view from the Master’s chair – as I am currently learning that role for my year as Master. It’s great, feeling as if I’m actually sitting there, imagining all the perambulations as I go through each part of the ceremony.

At a Provincial Comms Workshop, older brethren to whom I showed the technology were very impressed with the experience. I sometimes use it to give some of our newer members a virtual look at The Grand Temple at Great Queen Street in the hope of encouraging them to attend a Quarterly Communication meeting.

“There are many different headsets on the market. I use is a Samsung Gear VR, powered by Oculus, and I use my old Samsung Galaxy s8 phone in it. My latest phone is not compatible with it – that’s something you’ll have to consider if you decide to immerse yourself in VR.” 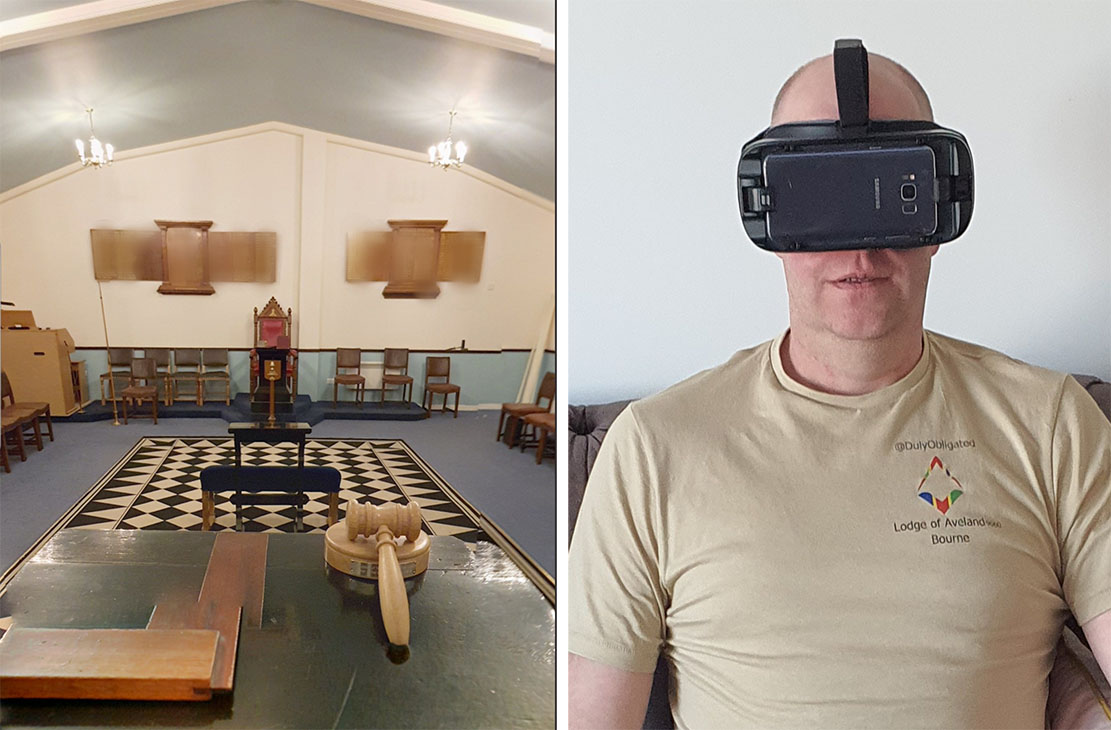 Mike’s VR view of the Bourne Lodge room from the Master’s chair, and Mike in his headset