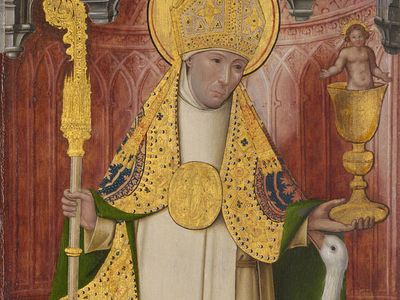 St Hugh and his swan

To help Brethren of St Hugh Lodge in Lincoln understand the background to their Lodge and the man who gave it its name, Zeb Zamo presented this brief history of both man and Lodge at the 150th meeting – which took place on November 16th; 822 years to the day after the Saint’s death.

St Hugh of Lincoln (Hugh of Avalon 1140-1200)
Hugh came from a noble Burgundian family. His father William, the Sieur (Sir) d’ Avalon was a Knight of a feudal family, who married Anne, daughter of the Lord Theys.

Their home was the castle Avalon.

Hugh was ordained Deacon at 19, and shortly afterwards given charge of the tiny parish of ‘Saint-Maximin’. In the mountains nearby the first monastery of the Carthusian Order of Monks.

About 1178, he was sent to Witham Somerset to establish a Charterhouse there. Under Hugh, as prior, the fame of that small and remote monastery spread, and its influence seems to have been far in excess of its size.

It was from Witham that Hugh was chosen, unexpectedly but successfully by Henry II, to be Bishop of Lincoln, England’s largest diocese, comprising 9 counties and extending over eastern England from the Humber to the Thames.

He established a school of theology and acted on occasion as judge, both in the Royal and Papal courts, where litigants were sometimes the Archbishops of Canterbury and York. Above all, he was a man of universal charity: Jews, lepers, the poor and even the neglected dead were all helped by him. It is estimated that Hugh gave one third of his yearly income to almsgiving. (Note This relates to the common thread which runs through out masonic order)

Hugh of Lincoln was as a friend to all. Men, women, and children, as well as Kings and animals, particularly a swan (which is an integral part of the Lodge Banner and logo) in Hugh’s manor at Stow.

Hugh died in London on 16th November 1200. It took six days to carry his body back to Lincoln and the large crowds which followed it everywhere indicated the widespread conviction that someone very special and universally loved as a saint had died. When the cortege arrived outside Lincoln it was met “by the Kings of England and Scotland, Archbishops of Canterbury, York and Ragusa (Dubrovnik), bishops, abbots, magnates, nobles, clergy and other dignitaries carried the coffin on their shoulders: the King of Scotland, William was so overcome with grief that he stood behind”.

Hugh was buried in the Cathedral. In 1256 the east end of the Cathedral was pulled down and rebuilt. This decision was partly due to the desire to erect a suitable shrine to contain the body of St Hugh, who had been canonized in 1220. The result was the famous Angel Choir

Oldest lodge: The Old Lodge of Lincoln formed in (1730)

Next oldest was Lodge No 116 (1737)  Same number as the Nightingale Rooms 116 Nettleham Road (Coincidence!)

Both of the above now erased Moving on

New Masonic Home, initially Lodges met at many different Hostelries
A new hall in Grantham Street was solemnly dedicated on the 18th of May 1854 by the Provincial Grand Master, the Earl of Yarborough, and the fraternity had a home of its own again. Masonry flourished and the brethren became ambitious for more commodious premises and in 1871 a Masonic Hall Company was floated to erect a suite of rooms for Masonic purposes, together with others to be let for public purposes. The site being secured in Newland and the foundation stone laid on the 17th of August 1871 the Lodge room was dedicated by the Provincial Grand Master on 29th October 1872.

St Hugh Lodge is formed
The Lodge was consecrated on March 26th, 1872, and its first WM was the Rev J G Bayles, who, like most of the officers, was from Witham Lodge 297 (Consecrated in 1793) who were the petitioners’ of St Hugh being the daughter Lodge

On the move 1888
By 1872 Masonry in Lincoln had been strengthened by the consecration of a second Lodge – St. Hugh – and in 1888 the Lodges were glad to move to premises on the south side of Mint Street, between Mint Lane and Guildhall Street . Witham and St Hugh shared premises until 1963.

1900-1902 Multiple Ceremonies are not new
Whilst St Hugh Lodge, as Lincolnshire’s University Lodge, is the ‘go to’ exemplar for multiple ceremonies – but thee are nothing new; in the first two years of the 20th century the Lodge worked a quadruple raising and a triple passing. The St Hugh Lodge of instruction was formed in 1906, proving very useful for newl- initiated brethren to attend and develop both their knowledge and understanding of the ceremonies.

Dodgy Dealings 1910
Masonic dodgy dealings (not for the first time). In Oct 1910 a W.Bro who had been given a lifetime membership resigned this accolade a number of years afterwards. Suffice it to say there were some financial irregularities that could have brought the Lodge and freemasonry into disrepute.

Researching the St Hugh Archives  1911 (The Safe)
It can be said (tongue in cheek) that it would appear that the secretary at the time must have been either a Doctor or training to be one as the writing was almost illegible.

The Festival of 1913
It was recognised by the Rt.W.,PGM. (Lord Yarborough) that St Hugh was the highest contributing Lodge in the province at that time. (Brethren of St Hugh bear this in mind)

George Edmund Davidge
It was at the Universities meeting at Grand Lodge 2017,  when looking through the scroll of honour under the Lincoln Window that we found the name of Lodge member George Edmund Davidge, who was killed in action on 26th September 1917 at Polygon Wood during the Battle of  Passchendaele.

On the 27th October 1915 Mr Davidge, of 181 Carholme Road, Lincoln, was  a commercial traveller. He was proposed by W.Bro W.H. Green and seconded by W.Bro W.B. Neal as candidate for initiation into St Hugh Lodge, and was raised in April 1916.

Just a year and three days  before his death he wrote the following letter : (Of which the original is in the Lodge safe)

It is with the greatest regret I shall not be able to attend the opening of the Lodge as Army duties unfortunately prevent me getting away.  However, I shall be with you in thought. With kind regards and best wishes to all brothers

1972 to the present St Hugh’s Centenary was celebrated
The centenary charter was presented, together with centenary jewels

1976 The St Hugh  Great Jewel Rebellion.  Grand Lodge wanted to standardise the jewels worn on lodge collars. St Hugh had its own jewels (from 1872 to 1976) based on the Grand Lodge design however they can be seen to be different, and if I might make an observation insofar that they looked like active rank jewels this may be the reason? After some discussion this led to the younger brethren voting to keep them at that time, W.Bro Gordon Goldacre, W.Bro Howard Thimbleby, W.Bro Brian Trowbridge,  W.Bro David Olsen et al, revolution was afoot brethren (the older Brethren however were unsure of how to respond) and it was not until the PGM at that time  Rt.W.Bro R.E. Richardson (1975 to 1978) said in a letter to the lodge secretary that we had to comply! They were as a matter of interest or just to make point they were still used up to three months after the PGMs request

W.Bro Frank Walker Director of Ceremonies and stickler for standards we should all continue to aspire to.

W.Bro M. Hackney ADC Excellent Ritualist remembered for his rendition of 1o Tracing Board and Lodge beneficiary. (and was a Lodge Steward in 1963)

W.Bro E J Thimbleby Excellent ritualist and keeper of standards Sheriff of Lincoln (without he claimed) the kindness of the Sheriff of Nottingham (The Question to visitors and brethren alike,  what is a, White Leathern Apron but a symbol of purity letting that sink in he said reminding them, so are white gloves (and would proceed inspected them). All in good humour brethren.

W.Bro J Freeman Captain of the bells Lincoln cathedral and humourist Rang a 5Hr Peel at our Centenary Celebrations (Yorkshire Lodge and the Tuba incident)

W.Bro R Horobin (Lodge treasurer) Lovely kind freemason supplier of Christmas Cake.  Everyone complained that it was as dry as old boots (Just gentle banter) It was very good. Has now being revived by W.Bro Goldacre’s wife. (Tell her it dry as old boots if you dare).

W.Bro (Dr) GF Birch very supportive to new initiates.  (Have a pint between restoring yourself to your personal comfort)

W.Bro J Pollard Lodge Secretary with general sour puss expression (as described by Ruth his wife) and resident Lodge wine expert. Jack had many little sayings, and usually when asked a question as to, “Have I got this right Jack?” and on hearing your response, if you weren’t 100% correct, he would reply with, “You’re right…but you’re wrong” and go on to explain the finer details!

2010 Universities Scheme
St Hugh registered its interest in becoming the universities scheme lodge for the province together with other interested Lincoln Lodges and we made our presentation to a committee. After being accepted we arranged a visit to Apollo University Lodge No 357 Oxford together with the then PGM DPGM our WM and members of our Lodge  witness a multiple ceremony at the Randolph Hotel arriving back near Lincoln at 1:30am-ish the PGM and DPGM having another 3/4hrs drive ahead of them. We thank province and other Lincoln lodges for their support.

Since then we have attracted about 70 young men to Freemasonry. 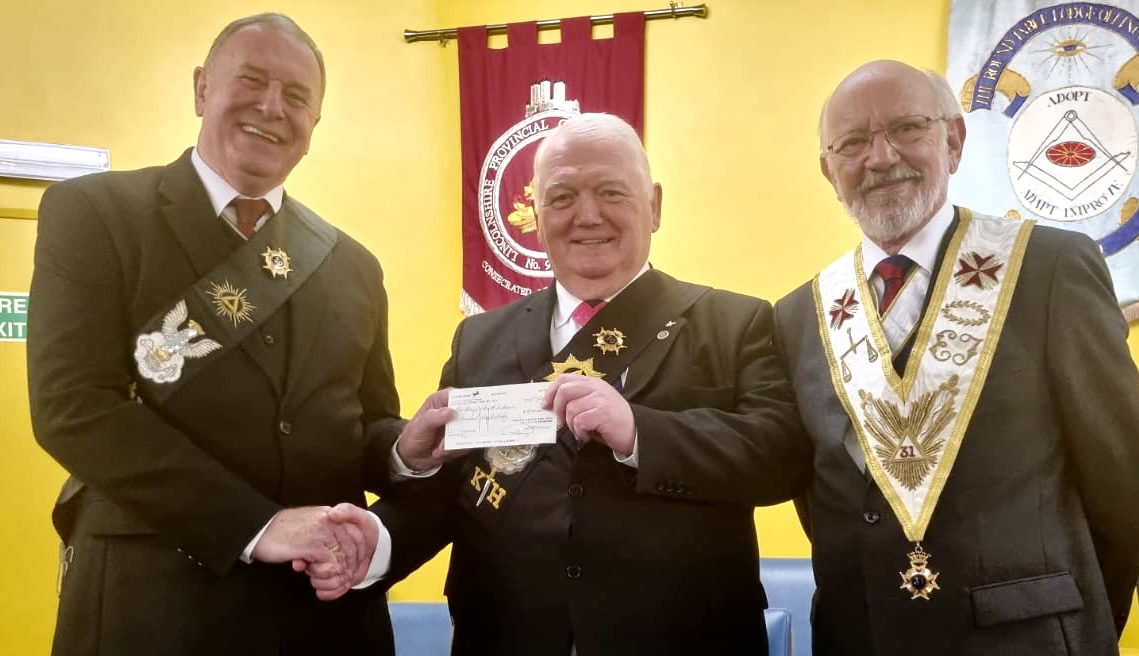 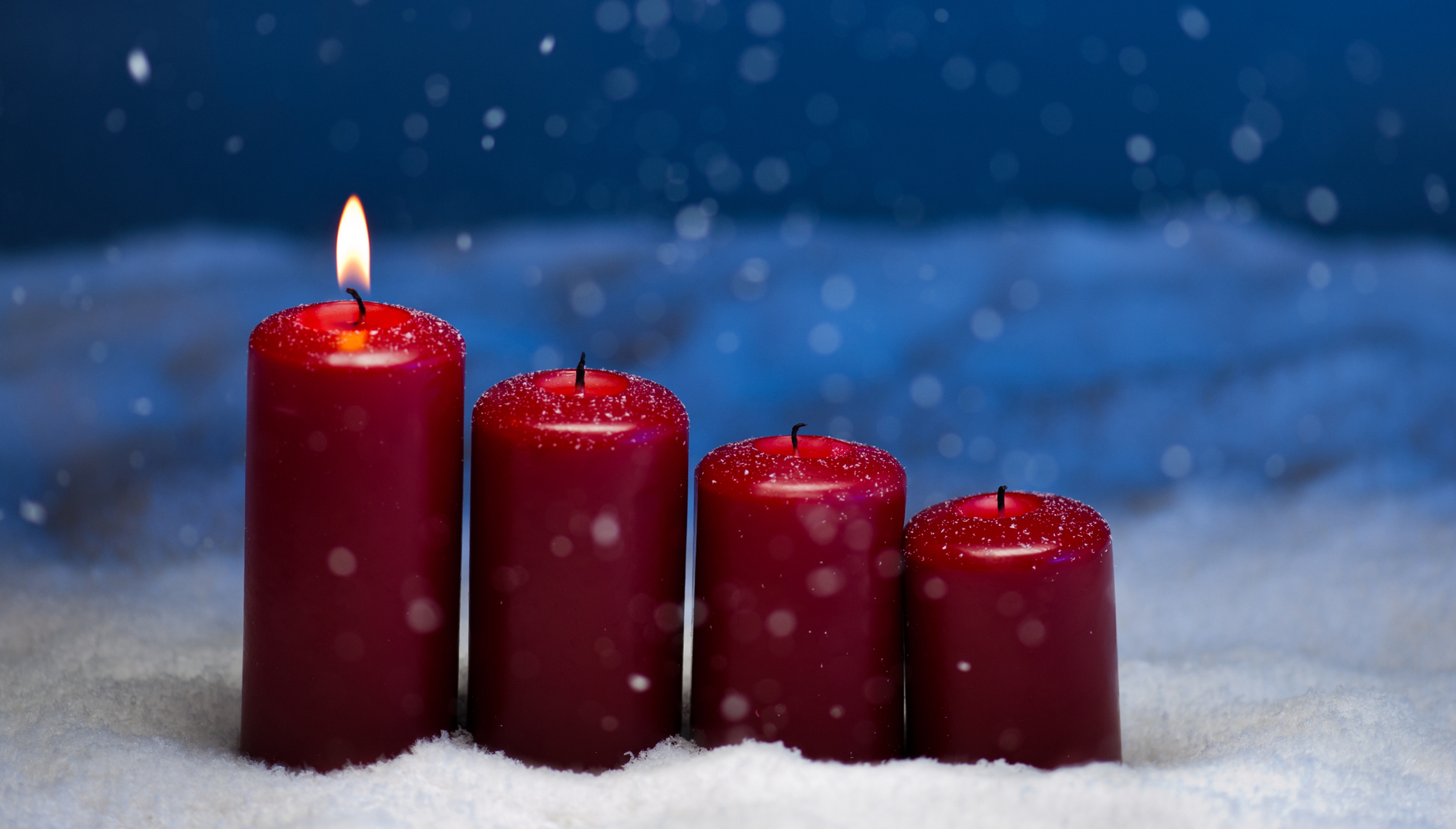