Masonic centres can open as warm spaces for freemasons, families, and widows

Freemasons have given a further £2,000 to good causes in Lincolnshire, sharing the funds between cancer and mental health charities.
Members of Excalibur Lodge in Lincoln have given £1,000 to Macmillan Nurses, made up of £500 from the Lodge and a further £500 in matched funding from the Freemasons’ charity the MCF.
The charity was selected by Stephen Smith, who’d been Lodge master in 2021 and 2022, after consultation with Tracey Washington, widow of his best friend Nigel, who passed in July 2021. Macmillan nurses supported Nigel during his illness, and the funds were accepted by the organisation’s Linda Judd by current Master David Groves.

Grimsby’s Daylight Lodge Master Mike Kelly accompanied by Mike Sutton to give a £500 cheque to Ann Walker Community Ambassador for Grimsby, Cleethorpes and District Fund Raising Group for Marie Curie Nurses. The cheque was part of the donation from the New Provincial Benevolent Fund, from which all of Lincolnshire’s 75 Lodges are given £500 annually to pas on to the good cause of their choice. Marie Curie Nurses provide dedicated hands-on nursing care and emotional support to enable people who are dying to remain in their own homes until the very end if that is what they wish to do.

The services of these nurses are always free to patients and their families. In 2021 the six local Marie Currie nurses gave 2440 hrs. night care from 10pm to 8am to 139 patients. It costs the charity £20 to provide one hour of Marie Curie Nursing care.

Saint James Lodge Master Ian Huggett, also in Grimsby, has presented a cheque for £500 to Will Clifford, secretary and trustee of “Your Life Matters”. Looking on in the picture is Tom Taylor, secretary of the Anderson Bates Masonic Benevolent Fund which donated the money for the lodge to allocate to local charity. “Your Life Matters” is a Grimsby charity which enables men and women struggling with their mental health to talk about their problems with complete discretion. The charity can direct people to more specific help on an individual basis. The Anderson Bates Masonic Benevolent Fund is a charity which helps all eight Grimsby lodges and allocates surplus funds annually to two of the eight in rotation. 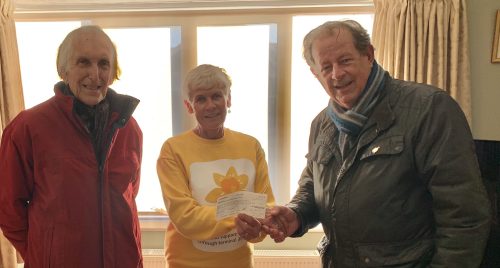 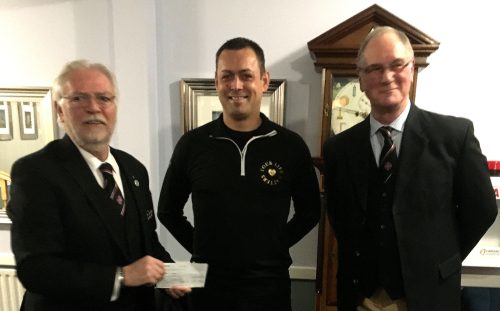